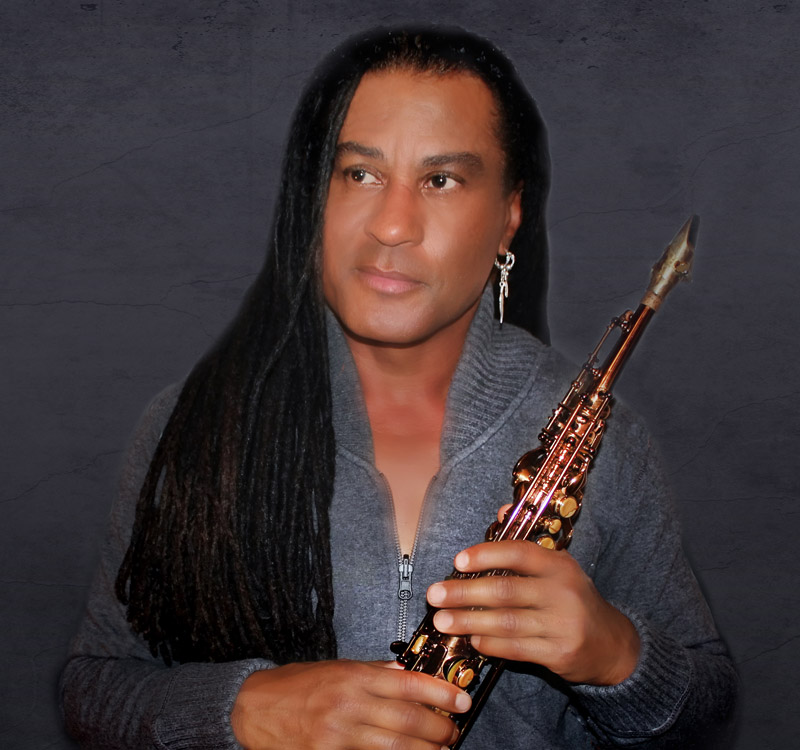 Re-Launch Of MarionMeadows.Com Provides Fans With An Immersive Multi-Media Experience

Albert Einstein once said “We all dance to a mysterious tune, intoned in the distance by an invisible piper.” For multi-talented saxophonist and consummate creative spirit Marion Meadows, the allure of music was never too far. The charismatic, strikingly handsome, eloquent and debonair musician, who happens to moonlight as a brilliant digital designer/photographer, and semi-professional cyclist originally had aspirations to become a veterinarian. “Reaching people through music has always been rewarding for me. Expressing yourself through an instrument and having listeners run through so many emotions is an artistic impression like no other,” says Marion. With a clear trajectory in sight, the stars aligned for Meadows one evening at Grand Central Station, when his saxophone was mysteriously overheard reverberating through the Big Apple’s oldest railway. Emmy-winning TV composer Jay Chattaway (Star Trek fame) was so enchanted that he introduced Marion Meadows to Grammy-winning pianist, producer and label owner Bob James, who helped Meadows to launch his career as a solo artist.

Close to 25 years later, scores of sold out shows, twelve critically heralded albums, a string of radio hits and collaborations with luminaries like Stevie Wonder, Eartha Kitt, The Temptations, George Benson and Norman Connors, Meadows is not through yet. “I have immersed myself in so many styles, from old school funk, jazz, rock and pop that a great tune is a great tune and I draw inspirations from all styles of music, but it is also from the outdoors and the beauty the world has to offer that inspire me each day” states Marion.

A musician unafraid to boldly fuse diverse influences, Marion Meadows sculpts a borderless musical tapestry on Whisper. “I came up listening to Miles Davis, John Coltrane and Duke Ellington but at the same time musicians like Earth Wind & Fire, Chaka Khan, Chicago and Parliament Funkadelic,” confesses Meadows who early on cut his teeth playing in Avant-Garde jazz groups alongside heavyweights Rashied Ali and James Blood Ulmer. Whisper , Marion Meadows’ first new recording in four years, features the saxophonist’s agile and ethereal soprano styling’s and some robust tenor work. It opens with the majestic, intoxicating and rhythmic driven “The Visitor,” which segues into the melodious and scintillating title track, co-written by keyboardist and long-time collaborator Michael Broening.

Meadows produced Whisper along with Carlos Pennisi, Bob Baldwin, Rahni Song and Broening. The album’s first single is the enticing, funky and hypnotic “Black Pearl.” Just like its namesake and gemstone, Meadows’ pearl is multi- layered, producing a beautiful interior within each shimmering chorus. Keyboardist Carlos Pennisi co-authored the song and helped Marion to compose five songs on the album. “Carlos helped me really try different musical ideas on Whisper . He is an amazing composer and multi-instrumentalist born in Italy with a great sense of using colors in his productions. As an artist I’m searching to try new ideas, and he definitely brought that to the table.” “Timeless,” is an evocative and tender impressionistic ballad, co-written with keyboardist Rahni Song, who joins Meadow on the track along with Pennisi and harmonica player Julian Davis. “Curves,” is an uplifting get-on-the-dance-floor anthem that serves up the right combination of grit and soul, while “Magic Life” and “Golden Curtin,” showcase Marion Meadows’ knack for crafting unforgettable melodies that magically have a way of transporting you. Meadows breathes new life into two jazz classics on Whisper, borrowing from the Freddie Hubbard and Dave Grusin songbooks. Freddie Hubbard’s 1970s landmark CTI classic “Sky Dive,” soars with Meadows’ own buttery soul rendition featuring his tenor and soprano alongside trumpeter Joey Sommerville. Dave Grusin’s 1980’s chestnut “Marcosinho,” gets revitalized with Meadows’ sparkling new take.

Recording Whisper for Meadows was truly a labor of love and part of that process was the joy of collaborating with friends. Longtime associate and keyboardist Bob Baldwin joins Marion on two of the album’s tracks, “Bottoms Up” and “Turn Up The Quiet.” Meadows says of his friend, “Bob always delivers!” Turn Up The Quiet” marks one of the high points on the project, as the duo score a home run.

Marion’s tender soprano gracefully teases and caresses the seductive melody as Baldwin finds all the accents to drive the song home. Flautist Ragan Whiteside joins Meadows on the show-stopping number, “Bottoms Up.” Marion calls Whiteside and Althea Rene (who is featured on “Golden Curtain,”) “two of the greatest flautists I know.” Not afraid to get loose and turn up the heat Marion Meadows serves up a scorcher on “Wild Thing,” a James Brown inspired romp that escalates things to a sweat inducing fevered pitch.

Hailing from West Virginia and raised in Stamford, CT, Marion Meadows began his musical endeavors at age eight, studying clarinet. At age 15, after hearing iconic saxophone masters like Sidney Bechet, Coleman Hawkins, Johnny Hodges and Stanley Turrentine, Marion Meadows’ switch to saxophone was imminent. During high school, he earned a coveted spot in the All-State Orchestra and Jazz Band and was afforded the opportunity to travel throughout Europe. His experiences during this time made him reconsider his ambitions for medical school and a career as a veterinarian. Upon graduation, Meadows attended the renowned Berklee School of Music in Boston, later transferring to SUNY Purchase School of the Arts. While still a student, the ambitious saxophonist worked steadily as a sideman. He jokes that he “got a graduate degree playing clubs.” He was also fortunate to study with the best including Joe Henderson, Dave Liebman and Eddie Daniels.

While at Berklee, Marion Meadows had another serendipitous encounter, this time with drummer producer extraordinaire Norman Connors, who was then playing with legendary saxophonist Pharaoh Sanders. Meadows says, “Norman Connors was really the guy who discovered me as an artist. The man who gave me my first shot.” Connors’ recorded Marion’s song “Invitation” and later extended an invitation to Marion to join his band. Connors, who collaborated with many of R&B and jazz’s greatest singers, afforded Marion the opportunity to work alongside such dynamic voices as Jean Carne, Phyllis Hyman, Glenn Jones, Angela Bofill, and many others. “That was a nice graduate school, sort of speak”, laughs Meadows. After graduating with honors from Connors’ University, the well- rounded saxophonist spent time honing his chops on the avant-garde circuit in the ensemble “Aboriginal Music Society," which featured guitarist James Blood Ulmur, percussionist Juma Sutan and pianist Kasa Allah.

In 1990 Marion Meadows made his recording debut, For Lover's Only featuring Eliot Lewis, Porter Carroll, Brian Keane and Average White Band alumnus Alan Gorrie. Two years later he joined forces with Will Downing, Bob Baldwin, Angela Bofill and Norman Connors for his sophomore recording Keep It Right There. Further solidifying his rightful place in the pantheon of great saxophonists, Meadows released Forbidden Fruit in 1994. He was joined by an eclectic all-star cast that included Eric Benet, SWV, Don Grusin and Dori Caymmi, among others. Body Rhythm came in 1996 and Pleasure, the following year. Around this time Marion Meadows relocated from Connecticut to the Valley of the Sun - Phoenix, AZ. He also settled at a new recording home, Heads Up International, where he released his sixth album, Another Side of Midnight in 1999, calling on a little help from some friends Bob Baldwin, Omar Hakim and Norman Brown followed by Next To You in 2000 and In Deep in 2002. Player’s Club in 2004 spawned two hit singles “Suede” and “Sweet Grapes,” and have gone on to be Marion’s signature songs. Dressed To Chill (2006) included memorable renditions of hits by R Kelly and Luther Vandross and joined Meadows with Chuck Loeb and his longtime touring keyboardist and vocalist Will Brock, among others. Secrets and its title track in 2009 advanced to the top of smooth jazz radio charts. During this time Meadows also relocated to Hawaii and has spent the past several years living in both locations. In addition to touring steadily on his own, Marion Meadows is also a member of the highly sought after Sax And the City Tour fronting the band with fellow reedman Paul Taylor, with additional guests Jessy J, young saxophone sensation Vincent Ingala and pianist vocalist extraordinaire Joe McBride.

The Maestro Duke Ellington once said “My attitude is never to be satisfied, never enough, never!” Like the maestro, Marion Meadows, is never content to rest on his laurels. With a four-year intermission between recordings, Marion Meadows is back with Whisper and ready to share his gift with the world. “Shhhhhhhhh, the show is about to begin.”