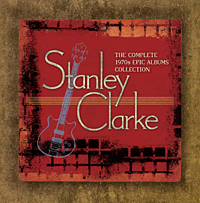 Both titles available for pre-order at Popmarket.com in advance of January 24, 2012, release date

The Ultimate Jazz Festival continues as Sony Music's PopMarket.com presents Complete Albums Collections from the Epic Records archives by two of the greatest names in modern jazz—Stanley Clarke and George Duke. These box sets contain the most famous and successful albums in these artists' respective careers, nearly all of them reaching high chart positions on the Billboard Jazz, R&B and Pop charts.

Newly assembled and affordably priced, these two latest titles will be available starting January 24, 2012, as limited edition D2C (Direct to Consumer) exclusives. Both titles are released by Epic/Legacy, a division of SONY MUSIC ENTERTAINMENT. They are currently available for pre-order at the website.

Each multi-disc box set contains the artist's entire album output during their original label tenure (Columbia, Epic, RCA, Arista, and so on), or focuses on some aspect of it. Each album is packaged in a replica mini-LP sleeve reproducing that LP's original front and back cover artwork. Booklets in the boxes contain full discographical information and rare photos. The Clarke includes an introduction by Stanley and the Duke extensive “behind the scenes" liner notes by George describing the making of the albums.

Both the Stanley Clarke and George Duke box sets have been newly-remastered by Sony Senior Mastering Engineer Mark Wilder. He has received three Grammy Awards® and seven Grammy nominations in his nearly 25 years at Sony. Both box sets are produced by Grammy®-winning producer Richard Seidel, with all packaging supervised by Grammy-winning former Legacy Vice President of Jazz Marketing Seth Rothstein. 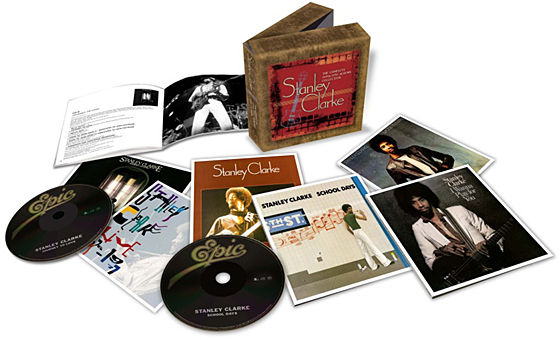 A product of the highly respected inner-city Philadelphia Musical Academy, bassist Stanley Clarke (b. 1951) was 20 years old when he arrived in New York and started gigging with the likes of Art Blakey, Gil Evans, Stan Getz, Horace Silver and others. Most importantly, there was Clarke's association with Chick Corea, with whom he became a founding core member of Return To Forever in late-1971. Within a couple of years, Clarke's overpowering presence as a (co-)bandleader and innovative finger-popping bass virtuoso earned him a spot as the inaugural artist on Nat Weiss's beloved New York-based Nemperor Records (distributed by CBS/Epic) in late 1974. Clarke had the freedom to explore multi-part symphonic works alongside rockin' funk jams, and his sessions attracted the greatest names of the day, including keyboardists Corea, Jan Hammer and Clarke's future collaborator George Duke, to drummers Billy Cobham and Lenny White, to guitar heavyweights John McLaughlin, Jeff Baxter, Ray Gomez, and on nearly every one of his Nemperor/Epic LPs, Jeff Beck. Clarke's second Nemperor LP, 1975's Journey To Love roared into the R&B Top 10 when one of its tracks, “Silly Putty," became an FM radio staple. Clarke's eclectic nature (which later brought him countless movie soundtrack scoring assignments) is heard in full on 1977's double-LP (now double-CD) I Wanna Play for You, which covers every base from jazz, rock and reggae, to early voyages into electronica, and much more. It is released here for the first time on CD in its entirety and in the correct sequence. 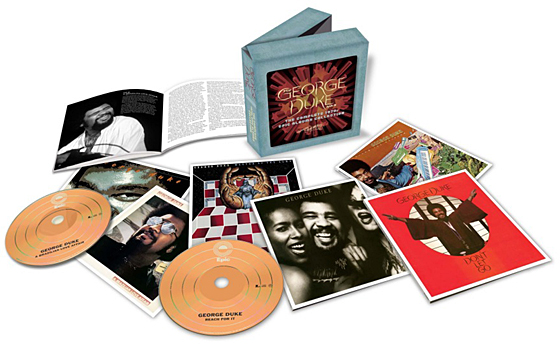 The near half-century performing and recording career of George Duke (b. 1946) began in his native San Francisco Bay area as a teen keyboard prodigy, whose (later) conservatory training provided the foundation for his wide-ranging compositional and production skills. Recording as early as age 21, he went on to associations in the late-'60s with European jazz-rock fusion violinist Jean-Luc Ponty, legendary bandleader Cannonball Adderley, and most significantly, Frank Zappa and the Mothers Of Invention, on-and-off from 1969 to '75. All the while, Duke continued to record as a leader (on a European label) under his own name, LPs that tempered his jazz and blues roots with forays into soul, funk, and the new rhythms of disco. As Duke points out in his 4,000-word album-by-album liner notes, all his influences and experiences were explored on the six albums he cut for Epic Records in the '70s. Duke routinely placed vocal and instrumental single tracks on the R&B charts, and cemented his partnership with bassist Stanley Clarke. The back-to-back Top 5 successes of 1977's RIAA gold Reach For It (with the #2 R&B hit title tune) and 1978's Don't Let Go (with the full-length 6-minute-plus “Dukey Stick," whose 'Part One' became a #4 R&B hit) ensured Duke's place as a command­ing presence on that decade's top-notch Epic and Columbia jazz rosters. These records also provided a launch pad for the prolific Clarke/Duke Project that later spanned the entire decade of the '80s. The final album in the box, A Brazilian Love Affair, unique in Duke's discography, was recorded in Brazil with several top name Brazilian artists and went on to become what many fans consider his best album.