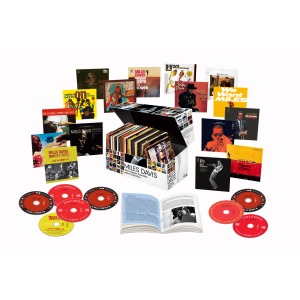 Each multi-disc box set contains the artist's entire album output during their Columbia or RCA tenure, or focuses on some aspect of it. Each album is packaged in a replica mini-LP sleeve reproducing that LP's original front and back cover artwork. Where applicable, the albums in each box include the bonus tracks that have been released on the expanded CD editions over the years.

Several of the box sets in this first wave of jazz titles contain bonus discs that build on the artists' LP catalog. The Dexter Gordon bonus CD, for example, contains a full program of material not on his original Columbia LPs. The Wayne Shorter box set contains two bonus CDs of his compositions as recorded by Weather Report during his years with the group. The Stan Getz bonus CD includes selections from the Woody Herman Carnegie Hall 40th Anniversary Concert (1976), Montreux Summit (1977), and Havana Jam (1979), all featuring Getz. The original Mahavishnu Orchestra bonus CD contains live tracks from their Central Park (NYC) summer 1973 show. And the Woody Shaw Stepping Stones bonus CD contains additional live tracks from his August 1978 dates at the Village Vanguard.

Virtually all of the CDs in these box sets have been mastered by respected Sony Senior Mastering Engineer Mark Wilder. He has received seven Grammy Award® nominations and 3 Grammy Awards® in his nearly 25 years at Sony.

As the dominant jazz record label for most of the 20th century, Columbia was home to a myriad of leading jazz figures during the LP era, and into the digital age. Forthcoming titles in the Complete Albums series will include the music of Stanley Clarke, George Duke, Thelonious Monk, Shakti with John McLaughlin, Charles Mingus, The Brecker Brothers, Duke Ellington, Louis Armstrong, Miles Davis, and more.

Click here to view the first wave of jazz titles in the Complete Albums series.