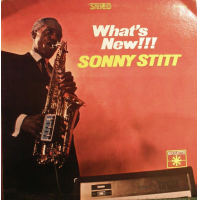 slideshow
Jazz still has many albums that are like that movie where the bell rings and the person at the door is the family's child who disappeared 20 years ago. During the digital revolution, not every album made the jump to CD or downloads. Some simply went out of print on vinyl and were never reissued. Then, when your LPs went into storage as you converted to iTunes libraries, external hard drives and Spotify, you found yourself cut off from your favorite albums. I know the feeling.

Back when I first started listening to jazz in the late 1960s, I was a big Sonny Stitt fan and loved his What's New!!! album on Roulette. The 1966 release was reissued on vinyl in 1976 on an album called Stardust. It featured Stitt playing the varitone, a device that hooked up to a saxophone or trumpet and gave the instrument an electric sound. Those were the days in the pre-fusion era when horns were desperately trying to keep pace with the electric guitar, bass and keyboards.

At any rate, What's New!!! was one of those LPs that went into boxes that are now someplace in my apartment building's storage cage. Heirs will eventually locate and open them. The album is impossible to find digitally, and I never thought I'd hear it again until recently, when a reader mentioned in an email that he had a few of Sonny Stitt's varitone albums that I may be missing. I first posted about my Stitt varitone fetish back in 2011. The reader offered to ask a mutual friend to make a digital burn of the analog albums. I was in heaven.

Mind you, What's New!!! isn't the best Stitt album ever recorded but it is seared into my memory as an LP I enjoyed. Long story short, the missing Stitt varitone albums arrived a couple of weeks ago on burned CDs, complete with generous printouts of the covers. Among them was Stardust. Pure joy!