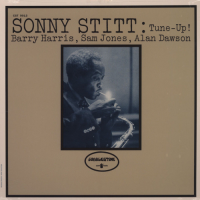 Back in 1971, when I began to listen steadily to jazz, I was nuts about an album that had come out that year by Sonny Stitt and Gene Ammons called You Talk That Talk. I was a freshman in high school and had taken up the tenor saxophone, an instrument that was much cooler to tote around in its case in school hallways than to stand alone in a room and practice scales. Back then, Stitt was for me. He made the saxophone sound like a Corvette. Even worse, he made it sound easy when in fact the instrument was a bear. Though my drive to become a saxophonist waned quickly as other interests kicked in, I was still a devoted Stitt fan.

One Saturday in late 1972, I was at Sam Goody's record store on Third Ave. in Manhattan. The chain's weekly ad in the Sunday New York Times Arts & Leisure section had announced the previous Sunday that Joe Fields's Cobblestone label would be on sale that week. My purchase that Saturday afternoon were two Stitt albums produced by Don Schlitten—Tune-Up! and Constellation, which were new.

When I arrived home, I put on Tune-Up! first. From the first track, I was astonished. Stitt played the title track on alto saxophone with a ferocity and clarity that was jaw-dropping. Backed by pianist Barry Harris, bassist Sam Jones and drummer Alan Dawson, Stitt sailed through the song flawlessly. It was a happy horn, a flying instrument that soared and swooped with determination. The ballad I Can't Get Started followed and was richly soulful with Stitt playing long, spring-loaded lines filling every bit of space. The rest of the album was equally determined and filled with bop surprises, On the last tune, I Got Rhythm, Stitt played alto and overdubbed his chorus on tenor.

Constellation featured the same rhythm section, with drummer Roy Brooks replacing Alan Dawson. The bop song choices were fabulous sleepers. The title track was a rarely heard song by Charlie Parker based on the chord changes to I Got Rhythm. After the standard ballad I Don't Stand a Ghost of a Chance With You, Stitt played Bud Powell's Webb City, Stitt's own By Accident, Ray Brown and Gil Fuller's Ray's Idea, Tadd Dameron's Casbah, the standard It's Magic and Topsy by Edgar Battle and Eddie Durham.

These albums featured Stitt at his neo-bop best. Many of his recordings from the early 1970s have been long overlooked. As I listened to my initial jazz vinyl purchases yesterday, I found myself nostalgically exploring several other Stitt albums from the period that were purchased when they went on sale—Goin' Down Slow, Black Vibrations, Giants of Jazz, So Doggone Good, The Champ, Mr. Bojangles, Satan and Tornado. Listening to Stitt still makes me want to wet a reed, slip my head through the black strap and watch myself play the tenor in a mirror. Another time, another place.

JazzWax tracks: You'll find Tune-Up! and Constellation issued on one CD by the 32 Jazz label in 1997 here.

And here's Casbah from Constellation...