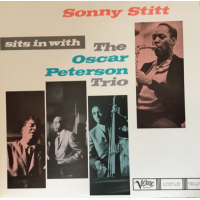 slideshow
I love Oscar Peterson's playing. I'm just never crazy about his tempos. As the leader on recording sessions with his trio or quartet, Peterson tended to take songs excruciatingly slow or erratically fast. I'm not sure why Verve and Pablo producer Norman Granz never bothered to mention this to him over a dinner or from the studio control booth. Only a handful of Peterson leadership albums are just right throughout. A Jazz Portrait of Frank Sinatra (1959), West Side Story (1962), We Get Requests (1964) and Tristeza on Piano (1970) come to mind.

Recorded in May 1959, the album featured Stitt playing alto saxophone on the first five tracks and then tenor saxophone on the last three. Ray Brown was on bass and Ed Thigpen was on drums. The song choices are predominantly bop classics, giving us a chance to hear Peterson's early piano approach rather than the show biz standards he tended to record later. For his part, Stitt is in top form with such a superb trio behind him.

The songs are I Can't Give You Anything But Love; Au Privave; The Gypsy; I'll Remember April; Scrapple from the Apple; Moten Swing; Blues for Pres, Sweets, Ben and All the Other Funky Ones and Easy Does It. In particular, Stitt's The Gypsy is a tour de force, loaded with soul and energy, and Peterson and Stitt on Scrapple From the Apple is spirited and loose. Even Blues has a nice mid-tempo bounce. The last track says it all—Easy Does It. Good advice.