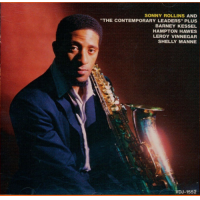 slideshow
Yesterday afternoon I spoke at length with Sonny Rollins. We talk fairly regularly by phone, and this time we spoke about a wide range of career topics, from his time in India to his visits to the West Coast, where he recorded two remarkable albums for Contemporary Records in 1957 and '58. On his first trip to Los Angeles, Sonny was a member of the Max Roach Quintet, featuring Kenny Dorham (tp), Sonny Rollins (ts), Ray Bryant (p), George Morrow (b) and Max Roach (d).

Sonny wasn't under contract to a label at the time, and Lester Koenig, the founder-producer of Contemporary Records, wisely asked him to record. Koenig left the song choices and sidemen to Sonny. The result was Way Out West, recorded in March 1957, with bassist Ray Brown and drummer Shelly Manne (for my interview with Sonny on the album, go here). Before Sonny returned to New York, he proposed to his first wife—the actress-model Dawn Finney. Sonny said they were introduced in L.A. a year earlier by dancer Frances Taylor. Taylor was dating Miles Davis at the time and would marry the trumpeter in 1960. Finney returned with Sonny to New York but the marriage would last only a year.

In the fall of 1958, Sonny was again on the West Coast at the first Monterey Jazz Festival and playing clubs in L.A. and San Francisco. While in San Francisco, Sonny met bassist Leroy Vinnegar, who was leading a group. The two hit it off and they agreed to record together. Sonny reached out to Koenig at Contemporary. Koenig was overjoyed. Sonny, with Koenig's suggestions, chose the rest of the rhythm section—pianist Hampton Hawes and drummer Shelly Manne.

Then Koenig had an idea. He asked Sonny if he would be open to adding a guitar. Surprisingly, Sonny had never recorded with a guitar before. Sonny loved the concept, and Barney Kessel was brought on. Victor Feldman played vibes on one track, You.

The result was Sonny Rollins and the Contemporary Leaders. As Koenig wrote in the album's liner notes: “By this time the 'sidemen' were all Contemporary leaders in their own right, and it was decided to make it an all-leader affair... The tunes for the album were selected by Rollins from the seemingly inexhaustible sheaf of music he carries in his saxophone case."

Recorded over three nights in October 1958, the album's songs were I've Told Ev'ry Little Star, Rock-A-Bye Your Baby With a Dixie Melody, How High the Moon, You, I've Found a New Baby, Alone Together, In the Chapel and The Song Is You.

Many jazz fans are either unaware of this album or have skipped over it. The latter group tends to view it incorrectly as a “West Coast jazz" attempt or not up to the same standards as Sonny's East Coast recordings of the same period. Both conclusions are misconceptions. In fact, I'd say this album marked an important milestone in Sonny's career.

For one, Sonny had a highly polished and nimble rhythm section that allowed him to experiment on the fly. For example, if you want to hear the basis for the Sonny-Jim Hall union on The Bridge in 1962, listen to How High the Moon, on which Sonny plays with just Kessel and Vinnegar, with the piano and drums sitting out.

Second, the tight support of the rhythm section allowed him to unwind. For example, listen to Sonny's speed and relaxed delivery on You, plus his exchange with Feldman on vibes. And third, Sonny was already in John Coltrane's abstract territory on The Song Is You, offering his own “sheets of sound."

As Sonny told me yesterday he loved being in California in 1958. “New York was all concrete and could be oppressive. Los Angeles back then was beautiful. There was lots of nature—palm trees and cactus—and plenty of open spaces. It was liberating. How I felt was all in the music." Indeed, it was.

And here's You, with Victor Feldman...