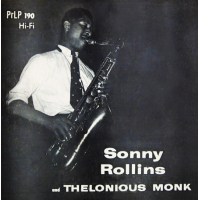 slideshow
Tenor saxophonist Sonny Rollins didn't record much with pianist Thelonious Monk, but what they did record together remains remarkable. It's a shame they weren't brought together for more albums, but the timing wasn't quite right. By the late 1950s both Sonny and Monk were towering leaders in their own right blazing paths on their own sessions.

For their first pairing, three songs were recorded for Prestige—Let's Call This, Think of One and Friday the 13th. The first two appeared initially on a Prestige 45 entitled Thelonious Monk Quintet. All three also were released on a 10-inch LP called Thelonious Monk Quintet Blows for LP, Featuring Sonny Rollins. The musicians were Julius Watkins (fhr), Sonny (ts), Monk (p), Percy Heath (b) and Willie Jones (d).

Sonny and Monk's second session came in October 1954, when they again recorded three tracks—I Want to Be Happy, The Way You Look Tonight and More Than You Know. These songs were added to a Monk 10-inch LP entitled Work! The quartet featured Sonny (ts), Monk (p), Tommy Potter (b) and Art Taylor (d).

Of the songs they recorded together, my favorites are The Way You Look Tonight and More Than You Know. On the former, Sonny opens low and then jumps high into the melody, sailing along flawlessly and unspooling a long ribbon of improvisation. Monk comps behind him and then takes his own regal solo. Sonny's tone is muscular and sand- papery while Monk chisels away at the song. When Sonny returns, he works his way up the song's chords and quotes what sounds like Whispering Grass (Don't Tell the Trees). Sonny's command is terrific, and his lines are breathtaking. Dig what he does on the second half and the outro. Frighteningly great.

The ballad More Than You Know opens with a Chambers bass solo. Then Sonny plays a bluesy reading of the standard. Here again, Sonny is strong and loaded with seamless improvised ideas. Monk takes a lengthy solo halfway in, which is surprisingly straight-forward, with fascinating chord work. On the rebound, Sonny's horn is mighty and seductive, especially on the double-timed passages. And dig that final upturned punctuation note by Sonny at the tail end.

Listening to Sonny and Monk together is jazz at its finest—two thick textures, spirited reworkings of the original melodies, and plenty of swing. The art is timeless.

And here's More Than You Know...