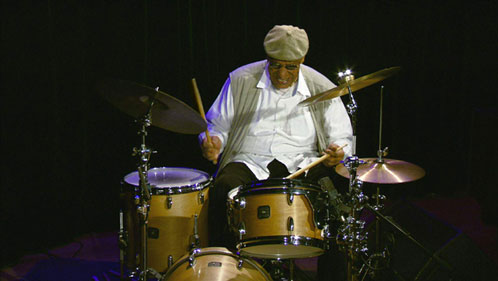 slideshow
Drummer Sunny Murray is a legend in avant-garde jazz circles, performing with everyone from Albert Ayler to Cecil Taylor, as well as recording several sessions as a leader. An accidental phone call led him to get together with the Philadelphia based ensemble Sonic Liberation Front, and it was a fortuitous meeting for all concerned.

This disc is split between two sessions, the first half from a studio meeting in 2008, and then the second half of the disc was recorded live in Philadelphia in 2002. Murray and a chorus of drummers and percussionists lock into a very free, yet totally accessible groove that allows them to form an ever shifting foundation under the horn soloists, while acting as soloists themselves, and as a pivot point around which the music revolves.

Murray's experience in ensemble playing really comes to the forefront, the drums and percussion never dominate the proceedings, but yet they are the critical voice, dictating the action and the ebb and flow of the music like the talking drums of Africa. SLF drummer Kevin Diehl writes that he was looking for a Native American sense of drumming as well as an African-American one, and that is well borne out with the the group drumming and various percussion instruments employed throughout the album. In one of the leadoff chapters in the new book The Informationby James Gleick, he writes about the incredible amount of information that can be contained by African talking drums, and while that is not necessarily what the musicians are aiming for here, the concept remains similar as torrent of data steams from the drums and percussion.

The group blends Afro-Cuban rhythms with strong potent free jazz on “Cosa de Grupo" and “Ochun Libre," and the live tracks “Some Other Times" and “Nomingo" develop into powerful releases of pure energy. This was a very exciting album that has a palpable sense of energy running through it the entire way. Drawing on the limitless potential of free jazz and adding musical influences from other cultures, this album creates a unique statement that on no account be missed. Sonic Liberation Front Meets Sunny Murray&#151amazon.com