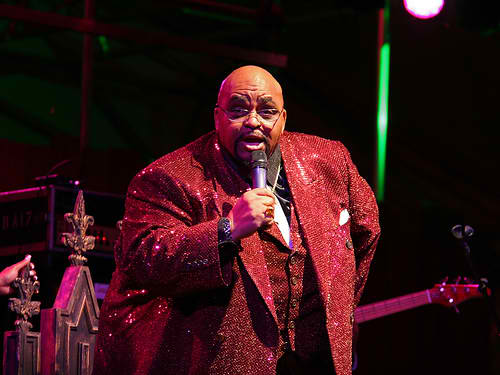 Solomon Burke was born to the sound of music in an upstairs room of a Philadelphia church and went on to become one of the greatest soul singers of the 1960s, renowned as among music's premier vocalists.

Yet his popularity never matched that of those he influenced, contemporaries including James Brown and Marvin Gaye, a reality he accepted with grace and some frustration, colleagues said.

Burke, 70, died early Sunday of natural causes at Amsterdam's Schiphol Airport, his family said in a statement on the singer's website.

“This is a time of great sorrow for our entire family. We truly appreciate all of the support and well wishes from his friends and fans," the statement said.

“Although our hearts and lives will never be the same, his love, life and music will continue to live within us forever," it added. The family did not elaborate on the cause of death.

Schiphol Airport police spokesman Robert van Kapel confirmed that Burke died on a plane at Schiphol. He arrived early Sunday on a flight from Los Angeles and had been scheduled to perform a sellout show on Tuesday in a church converted into a concert hall in Amsterdam with local band De Dijk.

Anti- Records President Andy Kaulkin, whose label produced Burke's comeback record, “Don't Give Up On Me," which won him his first and only Grammy, said, “Popular music today wouldn't be where it is without Solomon Burke."

Kaulkin called Burke a precursor to singers like Isaac Hayes and Barry White.

“I feel like his music is where it all came together, and when we think of '60s soul music it all started with Solomon Burke."

Burke, a giant man with a powerful soulful voice to match, appeared on stage on a throne in later years partly because of his regal persona and partly because of health problems. He joined Atlantic in 1960 and went on to record a string of hits in a decade with the label.

Kaulkin said Burke “gracefully" accepted the fact that his fame was eclipsed by singers he influenced.

“I think there was a little bit of frustration there but I don't think it ruled him at all," Kaulkin said.

Two of Burke's best-known songs reached a wider audience when they were featured in hit movies.

He wrote “Everybody Needs Somebody to Love" in 1964 and it was later featured in the Dan Aykroyd and John Belushi movie “The Blues Brothers." The Rolling Stones and Wilson Pickett also recorded it.

A bare-chested Patrick Swayze danced seductively with Jennifer Grey to Burke's “Cry To Me" in one of the most memorable scenes from the movie “Dirty Dancing."

According to his website, Burke was born March 21, 1940, “to the sounds of horns and bass drums" at the United Praying Band The House of God for All People in West Philly.

“From day one, literally God and gospel were the driving forces behind the man and his music," his website said.

He remained closely linked to the church as a preacher. In 2000, he played for then-Pope John Paul II at the Vatican.

Burke was inducted into the Rock and Roll Hall of Fame in 2001 and won a Best Contemporary Blues Album Grammy a year later for “Don't Give Up On Me."

Those honors sparked a renewed interest in the singer and he toured extensively around the world in recent years, including touring with The Rolling Stones.

Burke and his band would play without set lists, instead performing whatever the audience wanted to hear.

“It's like turning back the hands of time instantly," he said on his website. “We can be in the middle of singing something from my recent 'Like A Fire' album, and they'll call out 'Stupidity' from 1957 and we're back 50 years!"

Burke combined his singing with the role of preacher and patriarch of a huge family of 21 children, 90 grandchildren and 19 great grandchildren.

“Loving people," he said at a recent performance in London, “is what I do."

Associated Press Writer Mike Corder in The Hague contributed to this report.