SOURCE: RIFFTIDES BY DOUG RAMSEY
May 12, 2011
Sign in to view read count 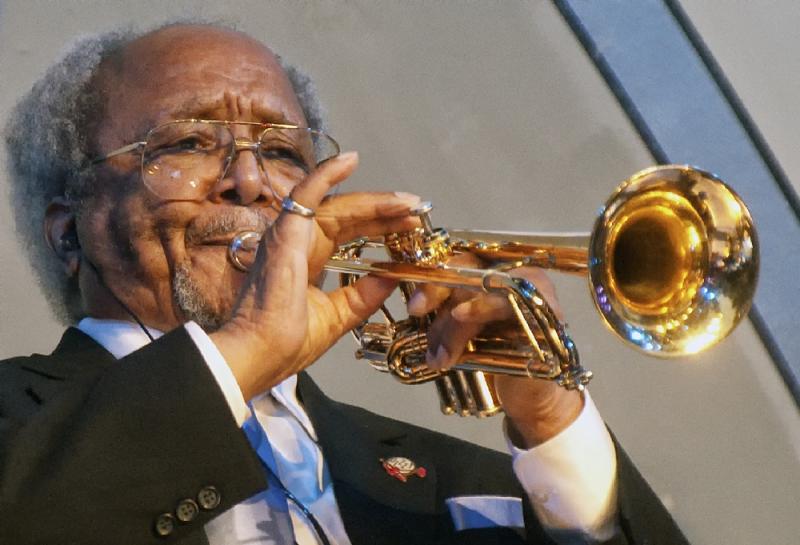 slideshow
Reports emerged late last night that Snooky Young died on May 5 at the age of 92. Young was that rare combination, a great lead trumpeter who was also a soloist of exceptional imagination, taste and humor. He began as a professional musician when he was a teenager in Dayton, Ohio. At 20, he joined he joined the Jimmie Lunceford band and in the course of his career played key roles in virtually every big jazz band of importance except Duke Ellington's. He was with Count Basie, Lionel Hampton, Benny Carter, Gerald Wilson, Benny Goodman, Charlie Barnet, Thad Jones-Mel Lewis, Kenny Clarke-Francy Boland and the Capp-Pierce Juggernaut.

A wizard of high notes and the plunger mute, Young was named a National Endowment for the Arts Jazz Master in 2008. His widest exposure came during 20 years in the brass section of Doc Severinsen's Tonight Show band. Loved by his fellow musicians, viewers and Tonight's host Johnny Carson, Young was occasionally featured on the program. In this clip, he sings and plays one of the Lunceford band's signature tunes from the days when jazz often led the hit parade.

Young was the consummate sideman but he had a moment of glory as co-leader with the stalwart alto saxophonist Marshall Royal on a 1989 album called Snooky & Marshall's Album. It had the remarkable rhythm section of Ross Tompkins, Freddie Green, Ray Brown and Louie Bellson—and Young at the top of his game.

As of this posting, no details have emerged about the cause of Young’s death or about funeral or memorial plans.