'Thomas Chapin, Night Bird Song' explores his life and celebrates his indelible contributions to the world of jazz through the memories and stories of those who knew him and believe the world should know him. 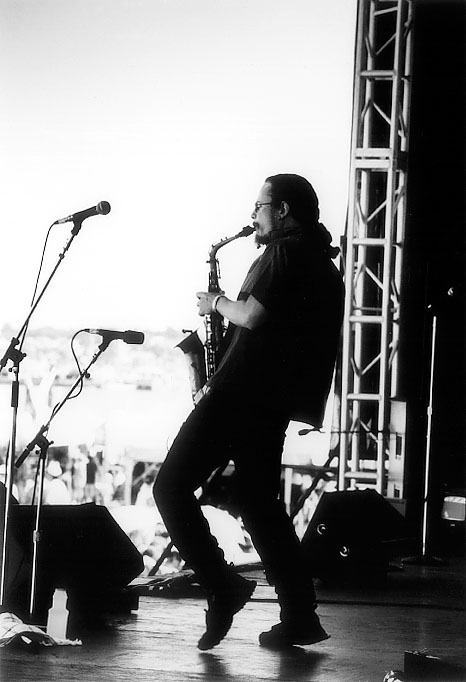 slideshow
Join the Litchfield Jazz Festival's tribute to Thomas Chapin, tomorrow and Saturday at the Goshen Fairgrounds, in Goshen, Conn. for a musical concert featuring Chapin's music and a sneak peak of a new jazz film about him.

Tomorrow evening August 7, the Litchfield Jazz Orchestra will salute Thomas Chapin as part of the festival's gala opening to its 20th Anniversary season. The LJO will play Chapin’s original arrangements, a concept proposed by bassist Mario Pavone, trombonist Peter McEachern and trumpeter Dave Ballou who is adapting and will be conducting Chapin's scores. Chapin performed many times in the early years of the Litchfield festival.

On Saturday, at 4:45 p.m., the Litchfield Jazz Festival will show a sneak peek of a new film about Chapin. The first 55 mins. of a two-hour film-in-the-making, Thomas Chapin, Night Bird Song, will be presented by Stephanie J. Castillo, an Emmy Award-winning documentary filmmaker and Thomas’s sister-in-law. The completed version of the film will be released in early 2016 and will explore his life and celebrate his indelible contributions to the world of jazz through the memories and stories of those who knew him and believe the world should know him.

Destined to be among the great jazz virtuosos, Thomas Chapin was nearing the pinnacle of his meteoric career when leukemia took him at the age of 40. Decades later, his passionate life and incandescent music continues to inspire new generations of artists and musicians. The new documentary Thomas Chapin, Night Bird Song will draw an intimate portrait of a musical explorer who transcended the boundaries of jazz and dissolved the rigid distinctions between sound and music.

Known for his exuberant alto sax and flute playing, Chapin is admired still as a multi-instrumentalist, band leader and composer. Once a musical director for the legendary Lionel Hampton, he was one of the few artists of his generation to exist in both the worlds of New York City's downtown, experimentalist scene and the uptown scene of mainstream jazz.