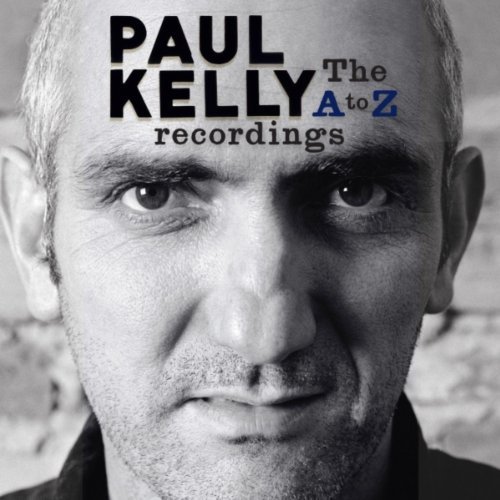 MELBOURNE, Australia—Paul Kelly's 8-disc (105 song), live box set The A to Z Recordings will be officially available in North America exclusively via Amazon on February 28. It will also available as a deluxe box-set version that bundles it with his critically acclaimed “mongrel memoir" How To Make Gravy (Penguin Int'l), available by itself and as a 9-disc audio edition (the 9th disc features guest readers that include: Russell Crowe, Cate Blanchett, and Hugh Jackman). iPhone and iPad apps are available for the book.

Kelly's stature as a world-class troubadour is confirmed by the release of the most comprehensive compilation to date of his recorded work on Greatest Hits, Songs From the South, Volumes 1 & 2, released in North America last Fall on Gawdaggie Music/CEN through RED Distribution, featuring a quick tour of 40 songs spanning 1985 through 2008.

In North America, Paul Kelly is loved by a fervent following of devoted, discerning listeners. In his native Australia, though, where his songs are lodged deeply in the country's soundtrack, Kelly is virtually a national hero.

In a career that spans more than 30 years, Kelly has released a steady stream of albums that showcase his emotionally vivid, musically expansive songwriting, capturing the essence of the Australian landscape while demonstrating Kelly's uncanny ability to distill a novel's worth of narrative and character detail into a straightforward, effortlessly accessible melodic pop tune.

Rolling Stone's David Fricke has called Kelly “one of the finest songwriters I have ever heard, Australian or otherwise," while Neil Finn of Crowded House has said, “There is something unique and powerful about the way Kelly mixes up everyday detail with the big issues of life, death, love and struggle—not a trace of pretense or fakery in there." Or, as his fellow Australian Kasey Chambers put it, “If I was only allowed to listen to one artist for the rest of my life, I would choose Paul Kelly."

In the years since the release of his 1981 debut album Talk, Kelly has maintained a prolific pace that's helped to win him a permanent place in the hearts of fans around the world. The Adelaide native first picked up a guitar and began to write songs in his late teens. He traveled extensively around Australia during his youth before settling in Melbourne, where he quickly established himself as a force in that city's diverse musical community. After stints as a solo folkie and a member of the R&B-influenced pub-rock combo the High Rise Bombers, he won a recording deal with the Mushroom label, for which he recorded the seminal albums Talk, Manila, Post, and Gossip, credited variously to Kelly solo and with backup combos the Dots, the Coloured Girls and the Messengers.

Gossip became Kelly's first U.S. release on A&M Records, which also issued his Under the Sun and So Much Water So Close to Home. Those albums won him reams of stateside critical acclaim, while expanding his loyal U.S. fan base. Kelly continued to stake out new territory on such subsequent releases as Comedy, Wanted Man, Deeper Water, Live at the Continental and the Esplanade, How to Make Gravy, Words and Music, Nothing But A Dream, Ways & Means, Foggy Highway and Stolen Apples. He also branched out stylistically with Smoke, a rootsy collaboration with the Australian bluegrass combo Uncle Bill, as well as an eponymous experimental dub-reggae album recorded as part of the techno-groove ensemble Professor Ratbaggy, and most recently a self-titled album as a member of the studio band Stardust Five.

An extensive CD re-issue campaign of his entire non-A&M releases will kick off this summer and run through 2014. These titles will be released digitally as well, at the same time their physical counterparts are released (many of which have long been out of print, or never released, in America).

In recent years, Kelly has showcased both the depth of his songbook and his skills as a solo performer with his long-running series of Paul Kelly A-Z shows, in which the artist works his way through an alphabetical list of more than 100 songs during a four-night stand of unplugged concerts.

In addition to his recording and touring career, Kelly has explored a varied array of other creative pursuits. His interest in aboriginal issues has led him to collaborate with aboriginal songwriter Archie Roach and the multicultural group Yothu Yindi. He wrote songs for, and acted in, the Australian stage play Funerals and Circuses, and has provided music for numerous Australian movies and TV shows, including award-winning scores for the films Lantana, One Night the Moon and Jindabyne. He's also written songs for several other Australian artists, and was the inspiration for the tribute album Women at the Well, on which 14 female artists performed interpretations of Kelly compositions.

Kelly's “mongrel memoir" How To Make Gravy has won considerable acclaim, including winning the Australian Book Industry Award for best biography, and he's published four volumes of his song lyrics, and written pieces for the prestigious Australian magazine The Monthly.

Kelly has won also won numerous awards, including eight Australian Recording Industry Association (ARIA) Music Awards, and was induced into that organization's Hall of Fame in 1997.

“One of the finest songwriters I have ever heard, Australian or otherwise." Rolling Stone's David Fricke

“There is something unique and powerful about the way Kelly mixes up everyday detail with the big issues of life, death, love and struggle—not a trace of pretense or fakery in there." Neil Finn (Crowded House)

“His songwriting is up there with the greats....the bittersweet and hard-core honesty of his lyrics&#151and his perfect, direct, often hilarious delivery—is the sort of thing you'll only see once in a lifetime if you're lucky. Drop everything, gather your posse, and go see him while he's over on this side of the planet: he's astonishing." Amanda Palmer

“If I was only allowed to listen to one artist for the rest of my life, I would choose Paul Kelly." Kasey Chambers