SOURCE: THE PHILLIPS AGENCY
May 9, 2011
Sign in to view read count 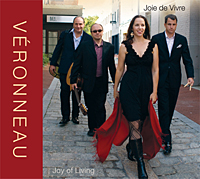 slideshow
Music lovers will soon enjoy a captivating collection of world wise jazz courtesy of stunning French Canadian singer Lynn Véronneau and the well-traveled musicians of her band, Véronneau. The international group has compiled some favorite music for their first album on the Indy label, Véronneau Music.

The group's CD hits the street and goes to radio in North America and Europe in May of 2011. Entitled Joie de Vivre (Joy of Living), the album flows seamlessly from gypsy jazz to samba to the immortal Beatles.

Wrote Canadian critic Jordan Richardson, “Joie de Vivre breaks new ground in a world dulled by powerless genres and pointless musical borders. The album is a cultured compendium of musical styles surrounding an astonishing voice&#151an exciting offering for those thirsting for something unique and beautiful."

Based in Virginia in the United States (where core members currently reside), the band formed in 2010 and enjoyed explosive popularity. By 2011 they were nominated for no fewer than three awards from the Washington Area Music Association (WAMA)! Audiences adore the group's song based, guitar driven, repertoire with lyrics sung in three languages. The busy troubadours will support their album release with additional dates in North America and Europe.

Joie de Vivre offers simple yet sophisticated arrangements of enduring classics from Brazil, Mexico, France and Great Britain. Unexpected interpretations raise even well known hits to new heights. The album will satisfy millions of new listeners who are happily skipping across musical boundaries in search of a good song.

The CD begins with the engaging “La Mer," known to English-speaking audiences as the Bobby Darin hit “Beyond the Sea," and reprised in Kevin Spacey's 2004 film by the same name. Lynn Véronneau sings the original Charles Trenet lyrics in French and Dave Kline's violin adds a touch of gypsy jazz. Latin Jazz is a big part of the Véronneau sound. Luis Bonfá's “Gentle Rain" is sun-kissed by Jeff Antoniuk's saxophone melting into the vocals and Jobim's “Corcovado" is dark and mysterious. There's a poignant cover of “For No One" and the traditional Mexican folk tune, “Cielito Lindo," is made new as a gorgeous lullaby. Audiophiles will appreciate well-researched tune descriptions in CD liner notes by Jordan Richardson.

Quebecoise Lynn Veronneau and her husband, British guitarist Ken Avis, formed Véronneau in 2010. The couple met a decade ago while performing at a festival in Switzerland. Each performed widely in Canada, the United Kingdom and the rest of Europe before teaming up in the U.S.

Avis has played guitar with several groups in Northern England and toured as lead vocalist with London's legendary Otis Grand big band. Lynn Véronneau studied Bel Canto with Claudia Barreau in France before becoming a classical vocalist. She let loose to sing lead in the notorious all female doo-wop group, Les Horribles Cernettes, then sang progressive rock, blues and folk before happily finding a cross genre home in world jazz. Her rich and captivating voice has an intonation and emotional quality reminiscent of Eva Cassidy. She is compared to Astrud Gilberto and Stacey Kent in style and delivery.