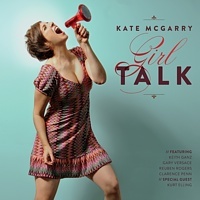 slideshow
With the soul of a folk singer and the facility of a jazz instrumentalist, McGarry puts her own spin on an evergreen, ever-swinging tradition.

Kate McGarry, one of her generation's most individual and influential singers, has earned acclaim for blending her love of folk and pop music with jazz fluency and improvisation. As the Nashville Scene said, the sweet-toned, Grammy Award-nominated vocalist “embraces jazz's freedom yet points the genre toward a future that's as fresh and thrilling as its past." With Girl Talk—her fifth Palmetto Records album, to be released April 10—McGarry pays homage to her role models among the great women of the jazz vocal tradition, from Betty Carter to Sheila Jordan to Carmen McRae. Accompanied by an intimately swinging jazz combo, McGarry puts her own inimitable spin on such classic songs as “We Kiss in a Shadow," “The Man I Love," the winking title track and, as a dream duet with Kurt Elling, the Brazilian “O Cantador." McGarry, although inspired by tradition, makes the album's songs feel utterly contemporary, not only through her distinctly 21st-century musical personality but through the personal emotions and sexual politics at play.

“Starry-eyed admiration and gratitude for our strong lineage of visionary jazz women is what fueled the making of Girl Talk, my first straight-ahead recording in many years," McGarry explains. “As part of my research for the album, I listened to hours of interviews with some of my favorite jazz singers—Sarah Vaughan, Betty Carter, Anita O'Day, Shirley Horn, Nina Simone, Elis Regina, Sheila Jordan, Irene Kral, Abbey Lincoln. There's something so compelling about hearing their speaking voices detailing the struggles and triumphs of their daily lives and journeys—my kind of `girl talk.' These icons were co-creators of the great art of jazz singing at a time in our nation's history when women's voices and dreams were so easily silenced or devalued."

The title track of Girl Talk, a “Mad Men"-era number by Bobby Troup and Neal Hefti, reflects the days when women were supposed to know their place rather than have their own voice. “The lyrics of that song are patronizing, of course," McGarry says. “But I learned it from the LP Betty Carter, Finally, where Betty pretty much obliterates the original lyrical intent and gives the tune a whole new feeling. Her version was a beacon for me. I love how the great women jazz singers didn't allow the songs of the time to define or reduce them—they redefined and expanded the meanings of the songs with their bold storytelling. In doing so, they gave themselves and other women a bigger space to live in."

With “The Man I Love" by the Gershwins, McGarry felt it as “such a sad song, with this idea that you couldn't be complete as a person without finding a man," she says. “We re-set the tune, removing some of the chords, changing some. We slowed it down, made it feel starker. And instead of concentrating on all this man's wonderful qualities, we focused on the words `I'm waiting.' It became more explicitly a cautionary tale." McGarry was moved to arrange the opening number, “We Kiss in a Shadow" (from The King and I), after she read a story about the New Jersey student who jumped off the George Washington Bridge in 2010 after being outed, cruelly, as gay. “To me, it became a song about civil rights," she says. “It's sad, but hopeful. It's written in anticipation of a time, hopefully soon, when people are free to legally love and marry whomever they choose—without having to suffer the discrimination and violence that come from ignorance and fear."

The challenge and opportunity in this album was for McGarry to “honor the tradition these women developed but also allow the music to reflect life today—my life today," she says. “Singing these songs can't be like putting on a costume. I didn't grow up in the '30s or '40s or '50s, and I wouldn't consider myself a traditional jazz singer per se. As someone who has covered everything from Björk to Sting to the Cars, I definitely have my own influences musically, just as I've lived in a world that's so different in terms of media and society. But the elements of harmonic and rhythmic improvisation, of swing, of storytelling—these are where those classic jazz singers and I connect. I see this album as a bridge between the contemporary things I do and the jazz tradition I learned so much from."

McGarry's previous Palmetto release was the Grammy-nominated If Less Is More, Nothing is Everything of 2008, an album The New York Times called “astute and sensitive" and that impressed author Ted Gioia as “absolutely heartrending." The Boston Phoenix went further, saying: “If you want to know why there's no greater influence on the young generation of post-Joni female jazz singer-songwriters than Kate McGarry, check out her cover of the Cars' `Just What I Needed'—slow, mournful, with spare backing of ghostly organ, brushed drums, acoustic guitar and bass. McGarry is as beholden to folk and pop as to the tradition of Ella-Sarah-Betty, which she also happens to know cold."

Along with guitarist Keith Ganz, McGarry's husband and co-arranger/producer, the band on Girl Talk features musicians who have become like a family for the singer: keyboardist Gary Versace, bassist Reuben Rogers and drummer Clarence Penn. The arrangements range from quartet to trio to duo, with the haunted Jimmy Rowles ballad “Looking Back" featuring the singer with only Ganz's shadowing accompaniment on electric guitar (plus a beautiful acoustic solo).

In the years since the release of her previous album, McGarry and Ganz experienced multiple losses, with the passing of parents and McGarry's beloved singing teacher (Dr. Horace Boyer, a gospel music scholar). Adding to the life changes, the couple relocated to the quieter, more spacious environs of Durham, N.C., after many years of living in New York. Summing up this period and its scene-setting for Girl Talk, McGarry says, “Inevitably, this has been a time of reflection, and the new album represents a celebration of mentors and parental figures of all kinds in my life."

Singer Kate McGarry grew up in Hyannis, Mass., as one of 10 children in a musical family that spent many nights singing. At the University of Massachusetts at Amherst, she earned a degree in African-American music and jazz; she began developing her organic vocal style through early training in jazz performance with iconic saxophonist Archie Shepp, and her experiences studying at a meditation ashram and exploring Celtic, Brazilian and Indian music also contributed to her widescreen vision as a vocalist and composer. After years in Los Angeles, McGarry moved to New York in the late '90s; her independently produced sophomore album, Show Me, was picked up by Palmetto Records, making her the first vocalist ever on the label's roster. Jazziz magazine declared about McGarry upon that first Palmetto release, “With this near-flawless album, she has arrived."

In 2005, McGarry's Mercy Streets album—which ranged characteristically from the Peter Gabriel title track to songs by Björk, Joni Mitchell and Irving Berlin—was called “one of the most important vocal albums of the year" by All About Jazz. Featuring originals alongside tunes by Sting and Bill Evans/Miles Davis, her album The Target was named one of the best jazz vocal albums of 2007 by Downbeat. The Downbeat reviewer called the recording “a milestone of maturity," adding: “No matter how many liberties she takes with meter and interpretation, she exercises a fidelity to the meaning of the song. McGarry has the pure untrammeled voice of an ingénue who finds wonder in the simplest of things." Her 2008 album, If Less Is More, Nothing Is Everything, was nominated for a Grammy Award, with The Wall Street Journal calling it “an exceptionally appealing blend of folk and jazz" for its mix of originals, standards, Brazilian tunes and songs by the likes of Bob Dylan. National Public Radio said: “Kate McGarry is called a jazz vocalist, but she's hard to pin down. She draws on the music of her youth to inspire her&#151from the Irish tunes of her family's roots to musical theater to pop songs."

McGarry has performed on some of the world's most prestigious stages, from Carnegie Hall, Lincoln Center and Birdland to the Berlin Jazz Fest, San Sebastian Jazz Fest and Jazz Baltica. The singer has recorded and toured with such jazz luminaries as Hank Jones, Fred Hersch, Kurt Elling and Maria Schneider. And she has toured Eastern Europe, South America and China on behalf of the U.S. State Department.