When [producer] Mark Ruffin asked me would I like to sing with Freddy Cole, I couldn't believe it. I can't tell you what a thrill that was for me. &#151Carolyn Fitzhugh 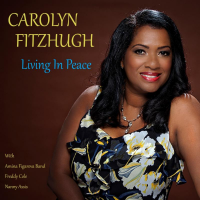 “I can’t tell you what a thrill that was for me,” says Fitzhugh. “When Mark asked me would I like to sing with Freddy Cole, I couldn’t believe it.”

Elder and fellow Chicagoan Cole appears in a sly duet with Fitzhugh on Ivan Lins’s “I’m Not Alone,” one of eight “new standards” on Living in Peace. Brazilian singer and percussionist Nanny Assis joins her on another tune, his cowritten “Intimate Acquaintances” from the 2016 musical Rio Uphill. Among the other jazzed-up modern staples are a lively take on the Average White Band’s “Queen of My Soul”; Gil Scott-Heron’s startlingly tender “Combinations”; and “Strollin’,” Prince’s swinging George Benson pastiche.

Alongside these scintillating interpretations, however, are four of Fitzhugh’s own original compositions. “Mark said he was impressed with my writing and wanted to showcase it,” she says. The selections include the fragile, wounded title track; the funky “Wish I Knew”; the upbeat charmer “Once Upon a Lover”; and “In the Autumn,” a sweet bossa nova that also features a bravura bass solo by Yasushi Nakamura.

Fitzhugh’s elevated technical accomplishment on Living in Peace is not incidental. While she received acclaim for her 2016 debut album, Simply Amazing, Ruffin felt that her voice needed further development before she recorded a follow-up. Fitzhugh accepted his constructive criticism gamely, even agreeing to work with vocal coaches to hone her instrument. (Among other things, the coaches helped Fitzhugh discover that she was not an alto, as she had long believed, but a mezzo-soprano.)

Her self-improvement efforts are evident on the new album, which shines not only with moments of grand virtuosity but with attention to the smallest of details: the precision, in short, that marks the truest and most dedicated of artists.

Born in Chicago on May 16, 1961, Carolyn Fitzhugh began taking classical piano lessons at the age of five. She became enchanted with all kinds of music through the songs she heard on the radio—songs like Roberta Flack’s “Killing Me Softly With His Song,” which she started playing when she ventured into playing popular sheet music at about nine.

Fitzhugh sang in her high school chorus and played piano in a jazz combo, dreaming of becoming a professional musician. At her family’s insistence she studied accounting at Chicago’s Roosevelt University, but supplemented that education with evening vocal and piano courses at Bloom School of Jazz. Even after she embarked on a 30-year career as an accountant and analyst for the federal government, she continued nursing her dream, sitting in with musicians at various clubs and restaurants and singing for two years straight as part of the legendary Von Freeman’s weekly jam session.

In 2011, with her children growing up, Fitzhugh made the decision to begin a six-year retirement plan from her accounting job and devote herself full-time to singing and songwriting. She retired in the summer of 2017. In 2014, she began recording her first album, Simply Amazing, in a sextet setting featuring guitarist Larry Brown Jr. and pianist Stu Mindeman. Upon its release in 2016, Fitzhugh was lauded as “an artist of the first order,” with “that something extra that inspires you to keep an ear cocked in her direction.”

That cocked ear finds its reward on Living in Peace.

Carolyn Fitzhugh will be performing at the Museum of Contemporary Art in Chicago on Tuesday 8/13 and will be announcing other Chicago-area dates in the coming months.