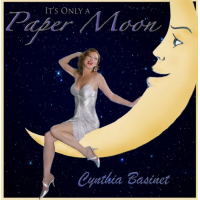 From the UN official site:

CYNTHIA BASINET, a singer, actress and humanitarian, said there was a recent trend “spoken aloud and unabated” asking what percentage of care, value and support was owed to the marginalized. The question was posed as to what percentage of people could justifiably be left behind. She asked the United Nations, “this “percentage of deciders” to show honour for the fate, self-determination and safety of the people of the Western Sahara."

Cynthia visited the W. Sahara in '01 in efforts to raise awareness for the Saharwian refugees living in self-determination.

She was later nominated for a shared Nobel Peace Prize as part of the “1000 PeaceWomen Across the Globe".

The singer is best known for the hit, “Santa Baby" and her latest “It's Only A Paper Moon" teams her with Lee Musiker, available through iTunes and Amazon.