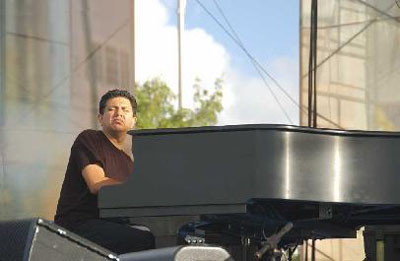 slideshow
The fourth effort as a bandleader by Silvano Monasterios, his debut release for the Savant label, Unconditional should bring national attention to a major talent that has remained largely unheard outside of the confines of his U.S. base in Miami, Florida. The Venezuela born pianist/composer who trained in the classical tradition at the esteemed Jose Angel Lamas Conservatory growing up in Caracas, while taking in the rich musical traditions of all of South America and as much jazz as he could encounter, has synthesized these various component influences into a potent personal style. Monasterios began earning critical acclaim on his first trip to the U.S., receiving a “Best Soloist Award" at the 1989 Miami Jazz Festival. The following year he moved to Florida to study under a scholarship from Miami-Dade College.

In 1998, Monasterios was voted “New Artist of the Year" at the Hennessey Cognac Jazz Search in New York City, leading to a slot at the Playboy Jazz Festival where he received favorable notice. That same year also marked the release of his first CD, Roads Not Taken. Since settling in Florida, where he was named “Best Jazz Musician" by the Miami New Times, the pianist has led his own impressive groups and performed with some of the area's best players, such as Sammy Figueroa, Melton Mustafa, Arturo Sandoval, Ira Sullivan, Nestor Torres, as well as with a host of visiting jazz greats, including Randy Brecker, Donald Byrd, Larry Coryell, Paquito D'Rivera, Mark Egan, Terumasa Hino, Marc Johnson, Dave Liebman, Claudio Roditi, and Dave Valentin. It was Monasterios' appearance on Figueroa's Grammy nominated Savant recording The Magician—to which he contributed two compositions, including the title track—that brought him to the attention of jazz industry veteran Joe Fields, whose instinct for spotting new talent has long been recognized. An invitation to record his own date for the label brings to the public Unconditional, undoubtedly one of the best label debuts to grace its imposing catalogue.

Unconditional features the Fourth World Ensemble, the fantastic band that Silvano Monasterios has been leading around Miami for the past three years. The group features the saxophones of Troy Roberts with the pianist's rhythm section mates, bassist Jon Dadurka, drummer Rodolfo Zuñiga and percussionist José Gregorio Hernández&#151each one a fine player who contributes greatly in bringing to fruition the leader's multifaceted musical vision, which is more a suite like unified whole than a collection of individual tracks.

The opening selection, “Farmacia del Angel," is Monasterios' dedication to his first important influence, his doctor father, a dilettante pianist whose after work playing first exposed his son to the pleasures of music making. The piece is a moving memorial by the composer to the man who was his greatest inspiration; an expression of his unconditional love. Named for a poem by the Colombian author Juan Manuel Roca, the appealing piece synthesizes several South American rhythms, combining a Brazilian feel with a Venezuelan merengue into an integrated swing, which buoys Roberts' reading of the alluring melody on tenor and subsequent solos by Dadurka and Monasterios.

“Monsieur Petit Noir" is named for Monasterios' pet dog who gives his owner the unconditional love for which canines are rightly well known. The mixed breed with a striking appearance betrays no single recognizable lineage is an apt metaphor for Monasterios' music, which is the result of various disparate strains becoming its own “animal." Flowing naturally from the opener with its repeated piano ostinato, its increased intensity inspires particularly passionate playing by Roberts and a virtuosic outing by the pianist that illuminates his jazz roots in the playing of Chick Corea, Bill Evans and Herbie Hancock.

Monasterios' “A Song For Jacques" memorializes Jacques Braunstein, whose weekly FM radio show in Venezuela afforded the pianist his first regular exposure to jazz as an adolescent. A successful entrepreneur, Braunstein's program and production of numerous jazz concerts, some of the country's few at the time, stemmed from his unconditional love of the music and served as a inspiration to Silvano, who would eventually become close friends with the Romanian expatriate who passed away shortly after their last meeting. “Part I" begins mournfully with Dadurka's bowed bass and Monasterios' delicate piano, which reveals his great affection for the music of the French Impressionist composers. The piece swells with hymn like jubilation as Roberts enters on tenor, emphasizing the narrative nature of the composition.

“Part II" of the suite takes on a more celebratory character. Zuñiga's drums and Hernández's percussion join together in spirited rhythmic elation propelling the band to some of the date's greatest heights. Here Monasterios' compositional mastery comes to light brightly as he weaves his many ideas into a remarkable whole greater than its constituent parts.

Monasterios first encountered Phil Markowitz's “Sno' Peas" on the landmark Bill Evans album Affinity, with chromatic harmonica master Toots Thielmans. Long a favorite of the pianist, he decided to write his own arrangement for the piece. Featuring fellow Venezuelan countryman Gabriel Vivas on bass with Roberts on soprano sax, the pianist sets the charming melody over a traditional Venezuelan gaita zuliana rhythm, putting his own personal stamp on a classic work.

“Forgotten Gods" is the date's newest composition by Monasterios. Written while the pianist was on the Mayan Riviera, its inspiration comes from the viewing of the many godlike images once worshipped in the region whose memory has all but been erased. Beginning softly with a bright reading of the pretty melody by the band, Monasterios raises the dynamic intensity of the music with an up-tempo straight ahead piano solo over fast walking bass that demonstrates the pianist's complete mastery of the instrument. Roberts switches to tenor for this exciting straight ahead outing that gives Zuñiga a chance to work out on his drums.

The title track “Unconditional" is another new piece by Monasterios. Developed from an old motif written by the pianist many years ago, it demonstrates superbly his ability to write a moving ballad in the jazz tradition. Reminiscent of the work of Tadd Dameron in its unabashed beauty it is interpreted stirringly by Roberts on tenor.

The concluding “Black Saint" features Monasterios on electric keyboards in a post Bitches Brew Miles mode. Utilizing the traditional chimbangle rhythm associated with the commemoration of San Benito in the northwestern Venezuelan state of Zulia, it merges African and South American rhythms with modernist jazz in a manner that distinctly identifies Monasterios as a futurist with traditionalist roots.

As the world of jazz continues to expand, the music's ability to absorb influences from various sources ensures its persistent development. The contribution of Silvano Monasterios to that development is sure to garner recognition for his masterful playing and composing. Unconditional brings this major new voice to a wider audience, announcing the arrival of an artist well prepared to usher the music's rich past into the future.