SOURCE: SOMETHING ELSE!
October 30, 2011
Sign in to view read count 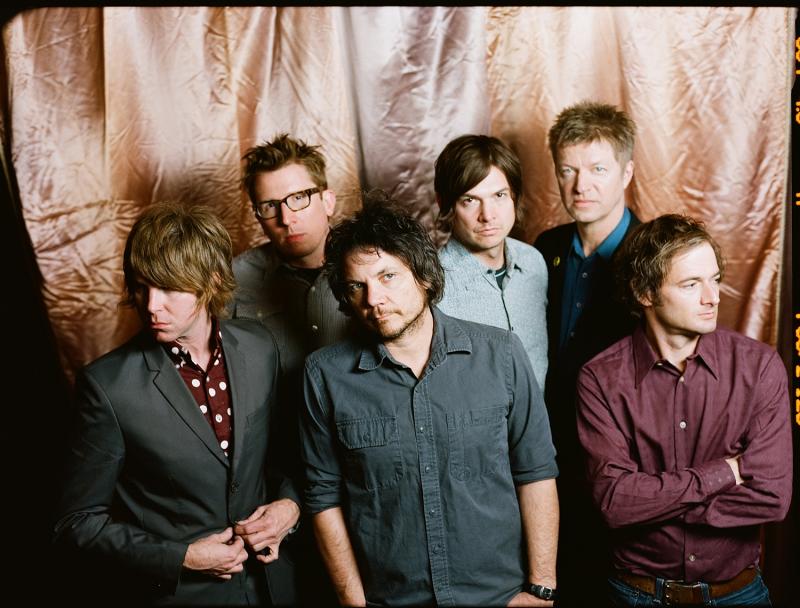 Wilco brought its amazing conglomerate of musicians to Tempe's Marquee Theatre in support of the terrific A ghost is born, with the equally talented, although unfairly publicly ignored opening act Calexico.

The 45 minutes allotted to Calexico was far from enough, but the band made the most of it, packing their setlist with a solid, high-energy selection of songs mostly chosen from the most recent album Feast of Wire and their then-current EP Convict Pool. A blend of the deep southwest and the expansive music one might hear in film score, Calexico's bold and evocative sound envisions long dusty roadtrips lost in the desert, a sound they are able to deftly pull off live thanks to a gifted band. In addition to upright bass, drums, and pedal-steel guitar, a two-man trumpet section (whose members also alternate on vibraphone, guitars, one lone tiny synth, and vocals) flavors their music with a good touch of authentic south-of-the-border zip, but never degrades into what could easily become a parody of mariachi music. By the conclusion of their set, which included Feast tracks like “Quattro" and “Not Even Stevie Nicks ..." as well as their stunning cover of Love's “Alone Again, Or" and a surprisingly uplifting cover of Joy Division's bummer “Love Will Tear Us A Part" (it must be the inclusion of those horns), Calexico had dashed my hopes that Wilco could possibly impress me.

In fact, I half-jokingly commented to my wife Alissa that we could leave now. How wrong I was...

Wilco took the stage with the quiet beauty of “Be Not So Fearful," a cover of mysterious singer-songwriter Bill Fay, then jumped quickly into the Beatles-esque “Hummingbird," from their ghost album—which would come to dominate the night with two-thirds of its tracks making an appearance. Along the way the band dove into deep cuts from their 2003 breakthrough Yankee Hotel Foxtrot such as a stunning reading of “Ashes of American Flags" featuring then-new Wilco guitarist and jazz-guitar great Nels Cline pulling off an absolutely mesmerizing, David Gilmour-inspired solo. The set relied heavily upon their latest two, more experimental albums, but also featured a couple of key cuts from their first two albums. Taking full advantage of the presence of Calexico, the band included the presence of the Calexico horn-section in the first of two encores for “California Stars," “I'm The Man Who Loves You," and “Monday." The band closed out the show with a faithful reading of Blue Oyster Cult's “Don't Fear The Reaper," book-ending the concert with a message of peace that singer/guitarist Jeff Tweedy repeated throughout the show—often with comments about Arizona's “red state" election status.

Wilco was not only able to meet my expectations, they exceeded them time and time again. Over the years, Tweedy has slowly recrafted Wilco into a true artistic vehicle, with this live band being the pinnacle. Adding guitarist Nels Cline also resulted in the kind of amazing artistic statement so rarely heard from fairly mainstream acts such as this. Cline's playing with Wilco is a testament not only to his flexibility, talent, and open mind—it's a testament to the artistic importance of their music.