Shirley Horn at the 4 Queens 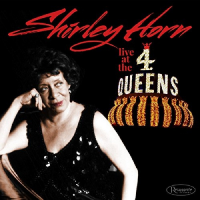 slideshow
If you were a female jazz vocalist who began your recording career in 1959 or later, you were almost certainly in trouble. Not only were you entering real estate already crowded with band veterans such as Ella Fitzgerald, Sarah Vaughan, Dinah Washington, Peggy Lee, June Christy, Carmen McRae, Julie London and Joe Stafford but you also were going up against pop titans including Patti Page, Dinah Shore, Eydie Gormé, Rosemary Clooney and so many others.

To complicate matters, the market in the ealry 1960s was tilting in favor of teens, elevating pop-soul singers such as Dionne Warwick, Diana Ross, Mary Wells and Dusty Springfield. Probably the only newcomer who escaped the quicksand pull during the '60s was Nancy Wilson.

All of this towering competition in a sinking market made the career of singer-pianist Shirley Horn much more difficult than it should have been. Horn began recording in 1959 at age 25 as a showcase with jazz violinist Stuff Smith. Her second album (and my favorite), Embers and Ashes (1960), remains superb, with Horn showing off her uncanny ability to accompany herself on piano as if two different people were in the studio.

Her Mercury albums in the early 1960s were less interesting, largely because they were less intimate. Horn wasn't a power singer but a trio confessionalist whose sensitivity blossomed when she worked with just a bassist and drummer. An orchestral backdrop was overkill for her vocal personality. As The Good Life exhibits on the Quincy Jones-produced Shirley Horn With Horns (1963), all she really needed was the rhythm section, featuring Bobby Scott on piano. Horn also was perfect on Sunday in New York, arranged by Johnny Pate on Travelin' Light (1965) for ABC-Paramount.

By the 1970s, recording dates thinned out and Horn pulled back from the studio grind. She was most often found performing at Washington, D.C., jazz clubs. Then in 1991, she recorded Here's to Life, arranged with enormous tenderness by Johnny Mandel, who won a Grammy for Best Instrumental Arrangement for the album. Johnny's string writing and Alan Broadbent's wandering piano would set a new golden standards for singers, including Diana Krall. Here's to Life finally gave Horn the caviar recognition she so long deserved.

Now, a new album of previously unreleased material by Horn in 1988 called Live at the 4 Queens is out from Resonance Records. The Four Queens was a hotel on Freemont St. in Las Vegas, and Horn was recorded live on a Monday night in May when the French Quarter Lounge featured jazz. What we learn from this live set is that Horn was a jazz pianist, first and foremost. It's hard to think of another female jazz vocalist who could play piano this well and powerfully. Vaughan and McRae, of course, could play well, but not with Horn's acumen or command.

On the new album's opening track, Horn takes on Randy Weston's Hi-Fly, driving the song all the way along. As for the rest of the album, her singing is a little reedy and the songs weren't exactly the most exciting choices (The Boy From Ipanema, Lover Man, You'd Be So Nice to Come to and Isnt' It Romantic, for example). The exception is Something Happens to Me, which has a hip, fresh pop feel. The other problem in places is that Charles Ables' fine bass playing was mixed too loud, overpowering Horn's vocal. Steve Williams' drums here also suited Horn perfectly. Ultimately, what is evident from this album is that Horn was a pianist who also could sing. Many times while listening to the album, I wondered who was playing piano behind Horn until I realized it was her. That's how good she was as a player and self-accompanist. If you want to hear the miracle of Horn's piano, dig Carmen McRae's Sarah: Dedicated to You, on which McRae sings and is backed by the Shirley Horn Trio, featuring Charles Ables (b) and Steve Williams (d).

It's a shame that none of the bright jazz producers Horn encountered along the way in her career had the good sense to record her just on piano—even solo piano. What an album that would have been!

JazzWax video: Here's a video on the making of the new album, featuring producer Zev Feldman...