Shemekia Copeland to Perform in Blue Bell on April 2 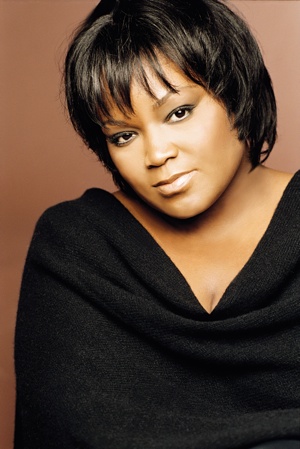 “Copeland delivers a gutsy collection of bluesy tunes steeped in Memphis soul and Muscle Shoals. She is a singer with fervor and funk, power, chops and range."—USA Today

Grammy-nominated and Harlem-bred vocalist Shemekia Copeland will perform at Montgomery County Community College's Science Center Theater in Blue Bell on Saturday April 2, 2011. Copeland's powerhouse music has garnered her praise from mainstream press and radio and earned her many awards. The new CD, Deluxe Edition, brings together the most exciting and soulful moments from Shemekia's Alligator albums: 16 pulse-pounding tracks of the very best modern blues and R&B. From the swaggering “Turn The Heat Up" to the soul-baring “Ghetto Child" to the rocking “Livin' On Love" and |It's 2 A.M." to the sly and sultry “Stay A Little Longer, Santa," Copeland's immense vocal talents and captivating personality never cease to delight and amaze.

On April 17th, Copeland will appear on the world famous BLUZAPALOOZA celebrity concert tour when it ships out to Afghanistan to entertain our troops at war.

Starring BLUZAPALOOZA veterans Copeland and Moreland & Arbuckle, this 14-day tour will take the blues to Kyrgyzstan, Afghanistan and Qatar, with most of the time being spent at forward operating bases within the war zone of Afghanistan. Concert information is as follows:

When 18-year-old singing sensation Shemekia Copeland first appeared on the scene in 1998 with her groundbreaking debut CD Turn The Heat Up, she instantly became a blues superstar. Critics from around the country celebrated Shemekia's music as fans of all ages agreed that an unstoppable new talent had arrived. Billboard declared, “Extraordinary talent...Copeland is a vocalist who knows few limitations. She's a true blues diva."

Shemekia followed up with 2000's Grammy-nominated Wicked, 2002's Talking To Strangers (produced by Dr. John) and 2005's The Soul Truth (produced by Steve Cropper). In that short period of time, Copeland earned eight Blues Music Awards, a host of Living Blues Awards (including the prestigious 2010 Blues Artist Of The Year) and more accolades from all over the world. Rock legend Robert Plant called her “the next Tina Turner."

Born in Harlem, New York in 1979, Shemekia came to her singing career slowly. “My dad knew ever since I was a baby. He just knew I was gonna be a singer," says Copeland. Her father, the late Texas blues guitar legend Johnny Clyde Copeland, recognized his daughter's talent early on. He always encouraged her to sing at home and even brought her on stage to sing at Harlem's famed Cotton Club when she was just eight. At that time Shemekia's embarrassment outweighed her desire to sing. But when she was 16 and her father's health began to slow him down, she received the calling. “It was like a switch went off in my head," recalls Shemekia, “and I wanted to sing. It became a want and a need. I had to do it."

Shemekia's passion for singing, matched with her huge, blast-furnace voice, gives her music the timeless power and untamed urgency of the greats who have come before her. The media has compared her to a young Etta James, Koko Taylor, Aretha Franklin and Ruth Brown, but Shemekia—who was raised in the tough, urban streets of Harlem —has her own story to tell. Although schooled in Texas blues by her father, Shemekia's music comes from deep within her soul and from the neighborhood she grew up in, where a daily dose of city sounds-from street performers to gospel singers to blasting radios to bands in local parks-surrounded her.

Ready to make her mark, 16-year-old Shemekia joined her father on tour after he was diagnosed with a heart condition. Soon Shemekia was opening, and sometimes even stealing, her father's shows. “She grabbed the crowd with her powerful voice, poised and intense," raved Blues Revue at the time. Eventually, though, it became clear to Shemekia who was helping whom. “Dad wanted me to think I was helping him out by opening his shows when he was sick, but really, he was doing it all for me. He would go out and do gigs so I would get known. He went out of his way to get me that exposure," recalls Shemekia.

Shemekia stepped out of her father's shadow in 1998 when Alligator released Turn The Heat Up to massive popular and critical acclaim. “Copeland belts out songs with a passion rarely heard. She roars with sizzling hot intensity," raved The Boston Globe. She quit her job at the dry cleaners and hit the road, playing to sell-out crowds night after night. Her star quickly rising, she appeared in the motion picture Three To Tango, and her song “I Always Get My Man" was featured in the film Broken Hearts Club.

Shemekia's following Alligator releases grew her fan base exponentially. She appeared twice on Late Night With Conan O'Brien, The Late Show With David Letterman, and also on National Public Radio's Weekend Edition and the CBS Saturday Early Show. She performed on Austin City Limits to an enthusiastic live audience and was featured in the Martin Scorsese-produced concert film Lightning In A Bottle, as well as on the PBS television series The Blues. She was even chosen to open for The Rolling Stones in Chicago.

With Deluxe Edition and a slew of new tour dates, Shemekia will continue to reach fans across all musical genres. “Shemekia Copeland is a major talent," raves The Chicago Tribune. “Wonderfully expressive singing...breathtaking performances that touch the heart," adds DownBeat. Throughout Deluxe Edition, one thing is clear: Shemekia Copeland is a charismatic artist possessing one of the great blues voices of this or any other era.