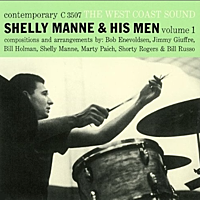 slideshow
In 1952, Shelly Manne was a bona fide jazz star. The drummer had won the Metronome and Down Beat jazz polls for several years running. But after 10 years in big bands, he was tired of the road. So Shelly and his wife, Flip, moved from New York to the San Fernando Valley in California, where they bought a horse ranch and Manne helped break in the West Coast jazz sound.

Manne spent a chunk of the year playing with Howard Rumsey's All-Stars at the Lighthouse in Hermosa Beach. Manne was waiting for his union card to come through, which required him to have six months of residency in Los Angeles. The lure of the city for musicians in the late 1940s and early '50s was so great that Local 47 protected the jobs of resident musicians by requiring newly arrived players to wait six months before qualifying to work. To allow new musicians to support their families, the Lighthouse didn't require a union card.

In 1953, with union card in hand, Manne signed with Contemporary Records and formed a septet—the first of his many Shelly Manne and His Men configurations. Manne recorded four 78s or eight sides. For arrangements, he reached out to the best and brightest orchestrators on the West Coast at the time—Bill Russo, Shorty Rogers, Jimmy Giuffre and Marty Paich. In 1955, the singles were brought together on a 12-inch LP called West Coast Sound Vol. 1. Four more songs were added with new arrangements—two by Bill Holman, one by Paich and another by Bob Enevoldsen.

The first session in April 1953 produced Mallets and La Mucura (arranged by Rogers) and You and the Night and the Music and Gazelle (by Russo). The personnel included Bob Enevoldsen (v-tb), Art Pepper (as), Bob Cooper (ts), Jimmy Giuffre (bar), Marty Paich (p), Curtis Counce (b) and Shelly Manne (d). [Photo above of Bill Russo in the early 1950s]

The second session was in July 1953 and included You're My Thrill (by Paich), Fugue (by Giuffre), Afrodesia (by Rogers) and Sweets (by Russo). The personnel was Bob Enevoldsen (v-tb), Bud Shank (as), Bob Cooper (ts), Jimmy Giuffre (bar), Marty Paich (p), Joe Mondragon (b) and Shelly Manne (d). [Photo above of Bob Enevoldsen]

The September 1955 session featured  Bob Enevoldsen (v-tb,arr), Joe Maini (as), Bill Holman (ts), Jimmy Giuffre (bar), Russ Freeman (p), Ralph Pena (b) and Shelly Manne (d). They recorded Grasshopper and Spring Is Here (by Holman), Summer Night (by Paich) and You're Getting to Be a Habit With Me (by Enevoldsen).

Manne's 1953 tracks are among the earliest studio recordings of pure West Coast jazz arranged for a small group. Rumsey's All-Stars, also a septet, recorded four sides for Contemporary in July 1952, and Shorty Rogers and His Giants, another septet, recorded for RCA in 1951. [Photo above of the Lighthouse in Hermosa Beach]

What makes West Coast Sound special is the focus on Manne's drums, which he plays with a delicate firmness. What's more, the variation of the arrangements and their knotty complexity combined with the breeziness of the counterpoint make for wonderful listening. Especially notable are Russo's cool-jazz charts for Gazelle and Sweets, which have a swinging Lennie Tristano feel.