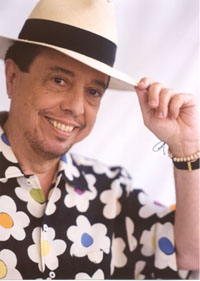 slideshow
In a career that spans more than half a century, Sérgio Mendes is an old hand at creating a unique sonic blend that electrifies a mass global audience. His knack for delivering hit after hit has made him the most successful Brazilian musician of his time. A grand conceptualizer, his well-polished talents as a pianist, composer, bandleader, vocalist and producer make him a truly singular artist. With Magic, his debut recording for the storied OKeh label, he triumphs once again, delivering a timely update on the infectious mix of Brazilian rhythms and contemporary styles from his homeland, the U.S. and elsewhere that make the Mendes sound instantly recognizable.

Magic spotlights the distinct talents of a large cast of both emerging and established Brazilian and North American musicians, vocalists, composers and producers. The eclectic line-up of multi-faceted collaborators underscores how Mendes has been so successful at forging fruitful partnerships since he emerged as a young jazz pianist in Rio de Janeiro in the early 1960s. Present to help Magic radiate its special distinctive charm are such one-of-a- kind artists as will.i.am, putting his producer's genius to work on one track, and singer John Legend. Among Mendes' Brazilian guests are vocalists Milton Nascimento, Carlinhos Brown, Ana Carolina, Seu Jorge, Maria Gadú, and Gracinha Leporace, Mendes' lovely wife and a noted vocalist from the bossa nova days. Also on hand is guitarist Guinga, one of Brazil's most accomplished string masters and composers. Recording sessions in Los Angeles, Salvador, and Rio de Janeiro involved a host of top flight musicians from both countries.

“I like to do things that are kind of bold, fresh and unique. That gives me a lot of pleasure," Mendes says of the creative process that has been central to his success. “I'm very curious and intuitive, and I also love to learn new things - I have no formula. I believe in the magic of the encounter... and that is what my life has been about, and also this album. For me, the most important thing is the melody. Then the arrangement. It's all about how you present the song. That plays a big role in what I do."

On Magic, the three-time Grammy® Award- winner taps the entire range of music styles he has explored, from samba jazz to hip-hop. The session's focal point is the exuberant “One Nation." “When I began the album last year," Mendes notes, “I went to Salvador to work with Carlinhos Brown and write a song for the World Cup. It represents the joy, the rhythm and the excitement of fútbol as seen through a Brazilian eye." “Atlântica," by one of Mendes' favorite composers, is an example of what the musician looks for to perform. “When Guinga played that song for me two years ago, I couldn't get the melody out of my head," he comments. “The harmonies and chord changes are incredible. The beautiful thing about the album is that I have songs from composers like Guinga and Toninho Horta and my friend Milton Nascimento, who wrote his tune just for this album."

Maria Gadú, a young singer, guitarist and composer from São Paulo, is another Magic revelation. “I met her about three years ago and said 'let's do a song together!' What a wonderful experience it was working with her." And, although he included songs like “Só Eu," a melodic beauty by the late maestro Moacir Santos, his theory teacher in Rio 50 years ago, Mendes also contributed more original works than on any previous album. “The songwriting aspect of this album gives me tremendous pleasure," he adds.

“Sometimes you have no idea of how younger people really appreciate your work and how knowledgeable they are of what you've done," Mendes comments on his collaborations with will.i.am and John Legend, “I like those experiences very much. I love reaching out and ending up with something that's bold and different. That's why I called the album Magic. Everything on it is magical."

Born and raised in Niterói, a city across Guanabara Bay from Rio de Janeiro, young Mendes studied piano at a local conservatory. An interest in North American jazz led him to Copacabana's fabled clubs of the late 1950s, where he performed with his first trio. In 1961, he formed the Bossa Rio Sextet, a groundbreaking group that was his first of many artistic coups. “Those were the days of the bossa nova when it was mostly performed by a guitarist and a singer," he recalls today. “I came up with the idea of using two trombones and a tenor sax, and it was a revolution. People loved the sound because it was totally different." In the two years that followed, he took the group to New York City to perform at the historic bossa nova concert at Carnegie Hall in 1962. He recorded albums with such jazz greats as Julian “Cannonball" Adderley, Phil Woods and Hubert Laws, and continued to work closely with his mentor, famed composer Antônio Carlos Jobim.

By the mid 1960s, it was time for a totally new direction, and Mendes once again created a revolutionary sound that would prove to be pop culture phenomenon for the following three decades. His new creation, dubbed Brazil '66, used two female vocalists to shape ingenious bossa-spiced arrangements of a wide-ranging repertoire that included the latest fare from Brazil, rock and R&B hits, and carefully chosen gems from the Great American Songbook. Significantly, his debut album with the new group, Herb Alpert Presents Sérgio Mendes & Brazil '66, was recently inducted into the Grammy® Hall of Fame.

Throughout his career, Mendes has continued to recharge his passion for creating fresh and innovative music by seeking out challenging partnerships and novel sources of inspiration. Occasionally, the process has been as simple as returning to the elemental Brazilian sound, as he did on such albums as Primal Roots and Oceano. At other times, it has meant embracing the spirit of a universal theme. His album Confetti and its title tune became the anthem for the 1984 Olympic Games while Pelé was the soundtrack for a motion picture about the world's greatest soccer player of all time. Within the past decade, Mendes has also successfully experimented with hip-hop and other of-the-moment styles.