Scott Hamilton at the PDX Festival 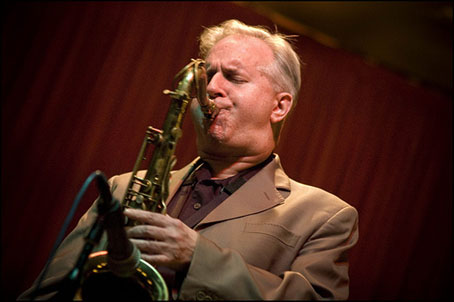 slideshow
When Scott Hamilton came to prominence in the 1970s he was a jazz wunderkind unlike any other saxophonist of his generation. He was twenty-two years old when he arrived in New York from Providence, Rhode Island in 1976. Most of his saxophone contemporaries wanted to be John Coltrane, blazing trails through the post-bebop era. Hamilton wanted to be Johnny Hodges, Ben Webster, Zoot Sims, Al Cohn. He was dedicated tounadulterated swing and harmonies not altered by complex chord substitutions. His untutored natural musicianship established him in the music before he reached the age of 30. Carl Jefferson, the founder of Concord Records, became enamored of Hamilton and recorded him frequently, to the point, I recall, that a prominent record producer exclaimed, “Good Lord, how many Scott Hamilton records does the world need?” The last time I checked, Hamilton’s album count as leader or co-leader was 102.

The world may not need Scott Hamilton records, but the evidence says it wants them. They keep selling, and he keeps filling concert halls and clubs. Last night at the Portland Jazz Festival, he filled Jimmy Mak’s, one of the primary listening spots in a city whose number of jazz clubs seems to belie speculation that the music’s audience is declining. He plays by ear—distinguishing him from the mass of musicians his age who tend to be rigorously schooled in harmony—and he plays with passion and humor. Hamilton is a quoter. In the course of “Cherokee,” for instance, he included, among other references, snatches of “Raincheck,” “Tangerine” and “March of the Siamese Children.” Hamilton appeared with pianist Dave Frishberg, bassist Dave Captein and drummer Gary Hobbs.

In the set I heard, Hamilton got off to a happy start with Hodges’ “Squatty Roo,” then floated into “In a Sentimental Mood,” his roomy, slightly grainy tone putting a bit of an edge on the Duke Ellington melody. In his solo, Frishberg was a pointillist, fragmenting the chords while building a lyrical solo. Through the eight tunes of the set, Frishberg’s work emphasized the wisdom of simplicity. Sometimes he seasoned the simplicity with note-bending and explosive little left hand surprises. Captein’s power as a bassist doesnot preclude precision and rapid articulation. Throughout the evening, he demonstrated his flexiility, notably in double stops in his solo on Ellington’s “Love You Madly.” Hamilton toasted Captein by quoting from “Cocktails for Two.” Hobbs solidified the reputation he developed when he was with Stan Kenton. He displayed plenty of power last night, but his most riveting moments were relatively quiet ones when he used brushes in exchanges with Hamilton and Frishberg.

Hamilton threw Frishberg a curve by calling the rarely performed Ellington ballad “Tonight I Shall Sleep With a Smile on My Face,” whose chord structure is unconventional and demanding. It turned out that Frishberg had never played the song. Hamilton went to the side of the stage and found a lead sheet. Frishberg studied the chords intently as he played the tune for the first time. The piece closed with Hamilton sustained and ethereal on a high note. Frishberg sighed deeply, shook his head and slumped in relief. Hamilton grinned with satisfaction at the success of the performance and the prolonged applause. Then he instructed the rhythm section, “B-flat,” set a riff, and the quartet played out on the harmonies of “I Got Rhythm.” They earned a standing ovation that lasted for a minute or two after they left the stand.

Further thoughts on the evening:

The softness and reflection of a Hamilton-Frishberg duet on “I Surrender Dear” was disturbed more than once by audience applause. Sometime, appreciation is more appropriately shown by silence.

Now and then a Portland MAX light rail train glided by just beyond the club’s big windows facing 10th Avenue. The passengers gazed in as we looked out at them. A woman on the train waved.

It’s good to be back in Portland.