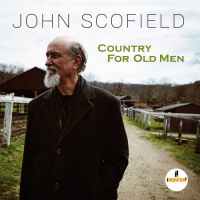 slideshow
Earlier this year, guitarist John Scofield won a Grammy for his album, Past Present. Released in 2015, Past Present came on the heels of tough times for Sco—the 2013 passing of his son, Evan, to sarcoma at age 26. Sco's music on the album was haunting and pained, the ache of a father and a family that endured the worst possible loss.

His new album, Country for Old Men (Impulse!), released today, is on the same trail bound for similar praise and prizes. As the title indicates, the album is a merger of country and jazz with Sco's ringing fusion flavor backed by keyboardist Larry Goldings, bassist Steve Swallow and drummer Bill Stewart. There's a saddle-and-stirrups quality to the music here—familiar cowboy tunes, Bakersfield romps, long-neck ballads and countrypolitan covers that Sco puts across with his singular jazz guitar. Songs such as Mr. Fool, Mama Tried, Jolene and Faded Love among other classics have a country feel and soul—but with jagged jazz improvisation. The result is truly fascinating. I can't recall another jazz artist so closely associated with the electric jazz revolution of the 1970s who has attempted such a blend or has pulled it off this artfully.

Truth be told, all of Sco's “riding partners" here are exceptional. Dig Goldings' frontier church organ on Faded Love and You're Still the One (my favorite), with Sco unleashing ringing metallic jazz notes while remaining solidly within the country idiom. Swallow and Stewart add just the right energy and touch on all of the tracks.

For me, Country for Old Men is Sco's most remarkable album to date. Which is saying something given his career and landmark recordings. This one, though, is a cut above for me, inventively merging his passion for country and jazz without sacrificing one for the other. There have been plenty of country guitarists who have attempted jazz albums in the past and lots of jazz artist who have taken on country songs. Sco's album is different, forging a new hybrid by addressing country on its level without trying to ratchet down jazz to service country's pop melodies. In the process, both jazz and country are better for it. Bravo Sco!

When I asked Sco last night why a country album now, he said, “I've just always loved real down-home country songs. And it's not a stretch to swing them and turn them into real jazz. I've wanted to do a country record for a long time. It was so important to get Larry, Steve and Bill. They're jazz players all the way but respectful of country music. None of us are country musicians, but we're country fans for sure."

For those downloading Country for Old Men, here are the credits: JazzWax clips: Dig this small film on the album at Sco's site (go here).

Here's Merle performing his original, so you have the context...