The book is an exploration of the creativity involved in the way drummers make things work, make things matter, and make sense of both. 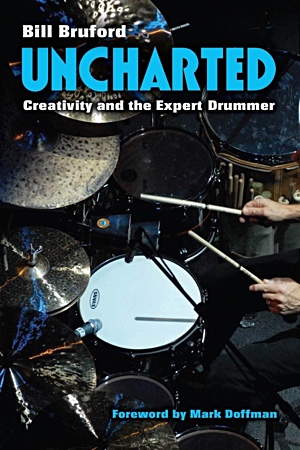 slideshow
Scholar and Rock & Roll Hall of Fame inductee Bill Bruford, best known for his work with Yes, King Crimson, Genesis and his prolific solo career, has authored a new book, to be Published by the University of Michigan Press on January 28th. Pre-orders are now being taken.

The book is an exploration of the creativity involved in the way drummers make things work, make things matter, and make sense of both. It draws on interviews with nine top drummers and Bruford’s own experience to improve understanding in collaborative popular music performance. What do expert drummers do? Why do they do it? Is there anything creative about it? If so, how might that creativity inform their practice and that of others in related artistic spheres? Applying ideas from cultural psychology to findings from original research into the creative behaviors of a specific subset of popular music instrumentalists, Bruford demonstrates the ways in which expert drummers experience creativity in performance and offers fresh insights into in-the-moment interactional processes in music.

“… an intelligent, thought-provoking treatise on the notion of creativity in Western popular music. Over the course of a number of interviews and case studies involving expert drummers, Bill Bruford examines how such practitioners approach and understand creativity. In the process, he crafts a relational processual model for understanding creativity and the creative process for real-time interactive performing arts (theatre, dance, music). The result is a fascinating and rewarding read that will surely affect players and listeners alike as they think about the concept of finding ‘creative meaning in making it work and making it matter.’” —Rob Bowman, Grammy Award Winning Professor of Music

“After forty years of creating professional music, pretty much all of it to his taste (passing rare), Bill Bruford has laid down the torches — and tried to capture their flame in words. Begin by running your eyes down the list of Bill’s collaborators. The expert performers and teachers will attract any reader with more than a passing affection for music. Simply put, it is a lights-out masterpiece of useful insight and passionate, reflective wisdom.” —Neil Peart, drummer Rush

“The contributions of the wide-ranging active percussionists Bruford surveyed will make this an important primary document for future researchers examining the role of drummers in group improvisation, the recording process, and more.” —Kevin Holm-Hudson, University of Kentucky

“The book lives up to its expectations. Drawing on his own insider’s knowledge and extensive interviews with an impressive roster of expert drummers about the nature of creativity and what it means to them, Bruford has produced a brilliant ethnography of professional drummers and drumming culture in the rock era.” —Mark Spicer, Hunter College and the CUNY Graduate Center

“It is no surprise to find Dr. Bruford so eloquently putting into language that which springs from such a non-linguistic source. Bill’s scholarly insights matched with a career’s-worth of personal experience shed an authoritative light on the creative role of the drummer. In today’s world of computer-generated rhythmic music, how wonderful to tap into this most organic and visceral element in music’s heritage, and deepen our appreciation of this immense creativity, past and present.” —Tim Garland, saxophonist, composer

“The author cites relevant scholarly work, his roster of drum experts is beyond question (including himself), but most importantly, the insights he synthesizes from his source material are both original and valuable.” —Shaugn O’Donnell, The City College, CUNY