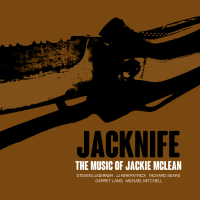 slideshow
San Francisco Bay Area woodwind expert Steven Lugerner continues his explorations of the music of jazz legend Jackie McLean with Jacknife, a hard-hitting West Coast post-bop quintet that Lugerner premiered earlier this year. The group has completed work on an album, The Music of Jackie McLean, slated for release on April 22, 2016, and will be appearing at several West Coast venues this fall. Lugerner is also planning spring dates to coincide with the CD release that will feature the virtuoso pianist and former McLean sideman Larry Willis.

Larry Willis made his recording debut on McLean’s 1965 date Right Now and appeared on the original Jacknife album (1966) and other recordings by the saxophonist. Lugerner connected with Willis this past summer at the Stanford Jazz Workshop, where Lugerner has been Faculty Coordinator since 2013 and Willis was a visiting artist.

Although Lugerner never had the opportunity to meet McLean, who died in 2006 at age 74, he listened deeply to the alto giant’s recordings as he was coming up. “I studied with alto saxophonist Mike DiRubbo, who studied directly with McLean at the Hartt School,” says Lugerner. “Mike was a huge influence on me when I was in college.”

In addition to his work with Jacknife this fall, Lugerner will be hosting/leading the Stanford Coffee House Monday Night Jazz Jam, which begins tonight (8-10pm) and runs for seven consecutive Mondays through 11/9. Lugerner and pianist Malcolm Campbell will be supported by a rotating cast in the rhythm section, including bassists Josh Thurston-Milgrom, Matthew Wohl, and Zach Ostroff, and drummers Michael Mitchell, Austin Harris, Britt Ciampa, and Adam Starkopf.

A skilled and diversified woodwind doubler on saxophones, bass clarinet, B-flat clarinet, oboe, English horn, flute, and alto flute, Lugerner is suitably focusing on the alto saxophone for his work with Jacknife: “This is one project where I can bring just one horn.”