SOURCE: ALL ABOUT JAZZ PUBLICITY
May 26, 2008
Sign in to view read count 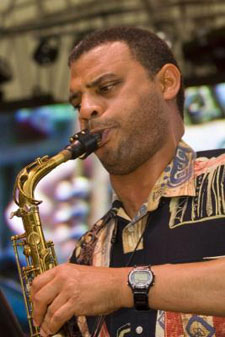 slideshow
Saxophonist Steve Wilson, one of the bright talents on the New York City--or any--scene, understands the value of music education. He's very involved in it. He also understands the importance of mentor-ship, which comes from his days hanging out with some jazz giants at his days as student at Virginia Commonwealth University, and later doing the same when he arrived as a young man in New York City and started to expand an already growing reputation.

Even with his experiences as an educator, a highly regarded sideman, and a band leader, he understands--and relishes--that he is still growing, still learning. That's probably why the Hampton, Virginia, native is able to play with, and enhance the music of such a wide variety of outstanding artists over the years, from the Maria Schneider Orchestra and Chick Corea's Origin, to associations with Dave Holland, Dianne Reeves, Billy Childs, Don Byron, Bill Stewart, James Williams, and Mulgrew Miller.

AAJ contributor R.J. DeLuke spoke with Wilson about his work as a sideman, his increasing emphasis on composition and his own growing discography as a leader.