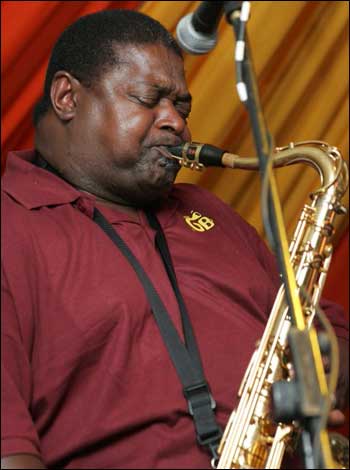 slideshow
The saxophonist Pee Wee Ellis played just one original in his first set at Iridium on Thursday night, and it delivered the only dose of nonswinging groove. That ratio felt emphatic, like a statement of principle.

Mr. Ellis, leading a cohort credibly billed as his all-star band -- with Mulgrew Miller on piano, Ron Carter on bass and Jimmy Cobb on drums -- was signing on to a mainstream jazz program, accepting the terms and conditions. He seemed intent on showing his comfort in the field.

If that was indeed the case, it's not hard to understand why. Mr. Ellis holds a vaunted place in the history of funk, chiefly as bandleader-arranger of the James Brown Revue during the late 1960s, the stretch that yielded “Cold Sweat," “Licking Stick-Licking Stick" and “Say It Loud -- I'm Black and I'm Proud."

He had a hand in writing those songs, among others, and they remain his signature contribution, even though he has done much else since, including consequential work with Van Morrison and a handful of the brighter stars of West African music. His main outlet these days is Still Black Still Proud, a touring James Brown tribute with an African slant, featuring guests like the Malian guitarist-singer Vieux Farka Tour.

By that light, Mr. Ellis's current engagement, which began on Wednesday, his 69th birthday, proposes a return to his own roots. He began Thursday's first set with a casual stroll through the jazz standard “There Is No Greater Love," and went on to play bebop chestnuts by Tadd Dameron ("Good Bait," also set at an easy lope) and Sonny Rollins (a pulse-quickening “Airegin," a relaxed but assertive “Valse Hot").

Playing tenor throughout, he began each of his solos behind the beat, phrasing at first in small parcels of notes and ending with a bluesy overspill. His tone was husky but rarely heavy, dark-hued but sweet.

And he clicked intuitively with the band, which exuded a calm authority. The hook here was that Mr. Ellis and Mr. Carter, who shared formative years in Rochester, were performing together for the first time since the 1950s. They haven't exactly been strangers over the years -- during the '70s they had strong mutual ties to the CTI label -- but this was still a reunion long overdue.