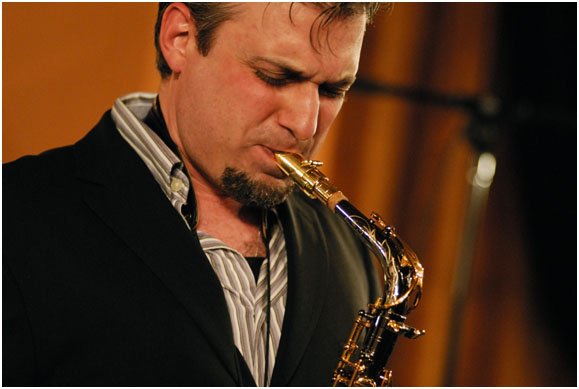 Combining an extensive knowledge of the jazz tradition and a highly individualistic approach to performance, Mike DiRubbo has taken his place in the elite of New York City's straight-ahead jazz musicians. His alto saxophone style reflects the influence of two of the giants of the instrument, Charlie Parker and Jackie McLean (DiRubbo's former teacher and mentor), along with an attraction to the sound of tenor saxophonists like Dexter Gordon and John Coltrane.

A native of New Haven, Connecticut, DiRubbo began clarinet studies at age nine, and took up the alto a few years later. His interest in jazz was spurred by an opportunity to play with the Mitchell-Ruff duo during a concert at Notre Dame High School; he subsequently won the school's Louis Armstrong Jazz Award.

After receiving a scholarship to the prestigious Hartt College of Music, DiRubbo studied under McLean, combining his penchant for learning by ear with formal training in African-American music. Throughout the Hartt years he frequently led groups in local clubs, appeared in the company of visiting New York musicians like trumpeter Eddie Henderson, and played bread and butter jobs in Latin bands. A short time after graduation, DiRubbo began a fruitful, long-term association with another Hartt alumnus, Steve Davis. In addition to regular gigs in the trombonist's bands, he played on Davis' first disc, The Jaunt (Criss Cross), and they formed an impressive alto/trombone front line on DiRubbo's inaugural date as a leader, From The Inside Out, released in 1999 for the Sharp Nine imprint.

A call from drummer Joe Farnsworth led to frequent work at Augie's, a New York watering hole that served as an incubator of promising young talent. In this hothouse atmosphere DiRubbo learned to hold his own in the company of emerging stars, such as tenor saxophonist Eric Alexander and trumpeter Jim Rotondi, plus veterans like pianist Harold Mabern and baritone saxophonist Cecil Payne. A few years later he moved to Brooklyn, New York, and became a member of pianist Michael Weiss' highly regarded sextet. DiRubbo has performed throughout the United States, Europe, and in Israel. His bands regularly appear in various New York City clubs and jazz festivals. In addition, DiRubbo has recorded as a sideman on 8 compact discs for the Criss Cross, Fresh Sounds, Knitting Factory, and Double Time labels.

From this varied activity, DiRubbo has evolved into a significant soloist, composer, and bandleader. Evidence of this progress is abundant on his two recent recordings as a leader for Criss Cross, Keep Steppin', and Human Spirit. A review from All About Jazz notes that Keep Steppin' “rides high on the combined strengths of a cohesive group sound, arresting compositions, and compelling individual performances by a quintet of energized young veterans." Another notice in All About Jazz (this one of Human Spirit) praises DiRubbo's ability to “create suspense by juxtaposing relatively relaxed playing and tense, jolting lines. He keeps the listener guessing by restlessly moving from one mode to another, always mindful of the effect of each shift on the solo as a whole." These are the qualities that make Mike DiRubbo a potent force in the world of jazz.