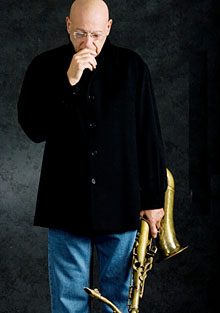 slideshow
Tenor saxophonist Michael Pedicin, whose 40-plus-year career has included tours with Dave Brubeck and Maynard Ferguson, has long demonstrated a profound feeling for ballads—those slow, tender songs with lovely melodies that, in the hands of the best purveyors, create a powerful emotional intimacy.

On his new CD Ballads... searching for peace, Pedicin focuses on the genre with seven masterful renditions, ranging from a timeless standard to attractive originals and classics of the jazz repertoire. The disc, Pedicin's 10th, is due out October 18th on Jazz Hut Records.

Ballads... searching for peace draws some of its inspiration from the 1962 Ballads album by John Coltrane, Pedicin's main musical hero. “From the time Trane did Ballads, I've always wanted to do a ballads album," explains Pedicin. “I finally did it. There is nothing quite as inspiring and satisfying for me as playing a beautiful ballad."

For the new album, Pedicin teams with longtime colleagues: guitarist John Valentino, who co-produced the session with Pedicin and engineer John Mulhern; pianists Dean Schneider (also a member of Pedicin's other group, the Brubeck Project) and Barry Miles; and the rhythm tandem of bassist Andy Lalasis, and drummer Bob Shomo.

The program kicks off with an evergreen that has been recorded by many, including Coltrane: Don Raye and Gene DePaul's “You Don't Know What Love Is," which opens and closes with expressive saxophone cadenzas. “I've been playing it for a long time," Pedicin says of the song, which was the title track of his 1991 FEA CD release. “It has always been one of my most requested songs."

Other highlights include Wayne Shorter's poignant “Virgo" and McCoy Tyner's gorgeous “Search for Peace," as well as Hank Mobley's rarely-played “Home at Last," done as a gentle bossa with solos from the leader, Schneider, Valentino, and Lalasis.

Originals comprise the remainder of the selections. “Blame It on My Heart" and “Few Moments" were brought to the session by Valentino; Pedicin contributes the romantic-tinged “Tell Me," its title suggestive of his other line of work as a psychologist.

Pedicin feels the album presents him at his best. “I don't think I've ever been able to proudly listen to one of my own CDs until this ballads album," he says.

The saxophonist grew up in a musical family. His dad, alto saxophonist and singer Mike Pedicin, was an extremely popular entertainer and bandleader in the Philadelphia area who had a No. 1 Billboard pop chart hit in 1957 with “Shake a Hand." “I idolized my dad," Pedicin says. “He allowed me the freedom to learn about music, the saxophone, and life itself—the way I needed to learn it."

By the time Pedicin Jr. was 13 and had heard saxophonist Willis “Gator Tail" Jackson in person and Coltrane and Cannonball Adderley on record, he knew he wanted to spend his life playing saxophone.

At 20, Pedicin began earning his living as a member of the horn section at Philadelphia's Sigma Sound Studios, where he worked for producers Kenny Gamble, Leon Huff, and Thom Bell, playing on sessions by such artists as the Spinners and Lou Rawls. He also went on the road with Maynard Ferguson, Stevie Wonder, and David Bowie.

In 1980, Pedicin made his first album, Michael Pedicin Jr. (Philadelphia International), which yielded the surprise hit “You"&#151big in New York City and even bigger in the Philippines. Subsequently he toured with Brubeck, and was a mainstay in the Atlantic City casinos, hiring orchestras and playing behind such singers as Frank Sinatra.

Pedicin has since played a lot of straight-ahead jazz, formed his Brubeck Project (which released its debut CD earlier this year on Jazz Hut), and toured with such notables as guitarist Pat Martino. He also earned a Ph.D in psychology and, in addition to his musical activities, has a private psychology practice specializing in helping creative people. He's an active educator as well, currently an Associate Professor of Music and Coordinator of Jazz Studies at the Richard Stockton College of New Jersey.

Still, playing comes first. “I will never put my saxophone down until I can't play anymore," he says.

Pedicin will be picking his horn up for several CD release shows this fall, with a 12/3 date booked at Chris' Jazz Cafe, Philadelphia, and others to be announced.