Mark Hauser's It’s All About the Journey is full of true passion for jazz, sensitivity and inspiration. 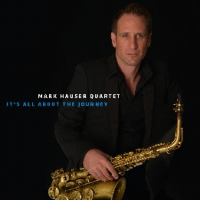 slideshow
The Mark Hauser Quartet’s new CD, It’s All About the Journey, will be released on October 14th. Mark Hauser (alto saxophone) presents eight of his own compositions and gives a high-energy performance with band members Marvin Trummer on piano, Dominik Schürmann on bass and Elmar Frey on percussion. The album will be played at various concerts in Switzerland throughout 2015 and 2016.

“After 10 successful years on stage, playing many different styles at public concerts, private events and in the studio, it is time to release an album with my favourite music—jazz. While working on it, I realised that I had already had all the melodies in my head for years. Some of the songs had already been composed, others I simply had to write down, try out and record. With this new album I want to enrich the jazz scene and give it something extremely special in order to invigorate it, challenge it and fascinate jazz listeners. This album reflects my journey through jazz—a journey full of crossroads, different compositions and richly coloured improvisational styles; an adventurous, experimental and constantly challenging journey. The Mark Hauser Quartet album, It’s All About the Journey is about the musical journey from which the captivating soul of every song emerges, nurtured by the creativity and free improvisation of the carefully selected band members. It is a journey full of true passion for jazz, sensitivity and inspiration. Set off on your own journey by listening to this album and discover where it can lead you...” —Mark Hauser, Autumn 2015

It’s All About the Journey is available from markhauser.ch. It can also be purchased on iTunes, Amazon and other online retailers. Staring in December 2015, a limited edition vinyl album will also be available.

Mark Hauser (alto sax), bandleader and composer. The musician from Glarus began his musical career at the age of 15. He studied at the Berklee College of Music in Boston and spent further years studying under Kenny Garrett, Joe Viola, Hal Crook, George Garzone and Jerry Bergonzi. After that, he studied at the Manhattan School of Music in New York. Hauser not only carries out his own projects as a bandleader, but he is also a sought-after sideman in various formations and ensembles. Since 1990, he has played with the following artists: Randy Brecker, Chico Freeman, Clark Terry, Adam Nussbaum, Mark Soskin, Billy Joel, Johnny Vidacovich, Al Porcino, Phil Wilson Big Band, George Garzone, Terry Lynn Carrington, Matt Garrison, Airto Moreira, Lew Soloff, Reggie Hamilton, Buster Williams, Christian Jacob and Danny Gottlieb. His leadership shows not least in his dialogue with fans.

Marvin Trummer (piano) completed his music studies on 31st May 2012 at Zurich University of the Arts with a Master of Arts in Music. He performs as a sideman in stylistically different projects on the keyboard, piano or producing and has already been on stage with greats such as Nelly Furtado, Tom Odell, Aura Dione, Alain Clark, Johannes Oerding, Gregor Meile, Philipp Fankhauser, Marc Broussard, Saint Lu, William White, Charles Simmons, Jazz Ellington, Ritschi, Börni, Aynsley Lister, Marc Sway, Myron, Carolin Chevin, Steff la Cheffe, Jesse Ritch and many more! Since 2012, Marvin Trummer has been happily endorsed by Clavia Nord!

Dominik Schürmann (bass) came into contact with music, especially jazz, very early on. At the age of six, Schürmann received piano lessons and at 17 he changed to contrabass. He has been taught by Roman Dyląg und Isla Eckinger and quickly became an integral part of the Swiss jazz scene. He has performed in numerous jazz clubs and at jazz festivals both at home and abroad. Since 1998 he has been a member of Thomas Moeckel’s Centrio. He also has several of his own projects, such as the “French Classics” recordings, produced by Swiss Radio SRF 2 with Swiss trumpet player Claudio Bergamin, Swiss-German recording production “Jazz meets Pop” with German saxophonist Jürgen Hagenlocher and CD recording “Tales of Day and Night” with his father, Niggi Schürmann, and Mario Schneeberger on the alto saxophone.