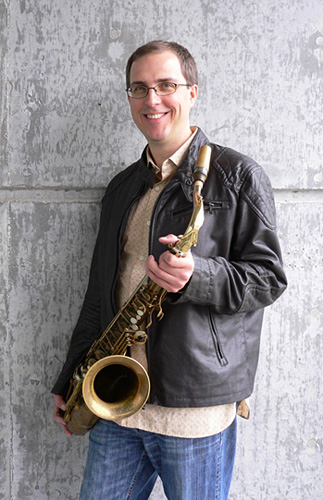 Chicago saxophonist/composer Geof Bradfield will premiere his new suite for jazz septet, Melba!, at the Carter G. Woodson Regional Library in Chicago on 7/21. The piece is a tribute to the great jazz arranger and trombonist, Melba Liston (1926-1999), and was supported by a commission from Chamber Music America’s 2011 New Jazz Works program (with funding by the Doris Duke Charitable Foundation).

Several other performances will follow in September, starting 9/5 at the Square Room in Knoxville, Tennessee; 9/7 at Northern Illinois University Recital Hall (DeKalb), where Bradfield will begin a new teaching job in fall 2012 as Assistant Professor of Jazz Studies; and 9/8 at the Green Mill in Chicago. Bradfield plans to record the material in early 2013.

Personnel for the dates will be trumpeter Victor Garcia, trombonist Joel Adams, pianist Ryan Cohan, guitarist Jeff Parker (with Mike Allemana subbing on the Woodson gig), bassist Clark Sommers, and drummer George Fludas. This is the same group that appeared on Bradfield’s acclaimed 2010 Origin Records release, African Flowers, with the addition of Adams and with Allemana filling in for Parker at the July premiere.

The Melba Liston estate had placed her lead sheets, scores, and other documents with Columbia College Chicago’s Center for Black Music Research, and that was Bradfield’s chief resource for investigating the musical record of her life. He immersed himself in Liston’s arrangements for such luminaries as Duke Ellington, Dizzy Gillespie, Mary Lou Williams, and Billie Holiday. The collection also contains Liston’s lesser-known charts for Motown and Stax, as well as musical data from her residence in Jamaica during much of the 1970s.

Of greatest interest to Bradfield are her prized collaborations with pianist Randy Weston, ranging from the landmark Uhuru Afrika (1960) to The Spirits of Our Ancestors (1991). This was the music that introduced Bradfield to Liston, directly influenced his acclaimed 2010 Origin Records release, African Flowers (named one of the year’s Top 10 jazz albums by the Los Angeles Times), and led to Melba!

“When I came up in the 1980s and was learning to play, everything seemed to be about extreme instrumental virtuosity,” said Bradfield. “The music of Randy and Melba was more complex. It had color and depth and a range of emotional expression. It had a real human element.

“I also loved the way their music tied a lot of things together: African music and Duke Ellington and bebop harmony and the extreme use of dissonance, which in Liston’s hands could suggest Stravinsky. Their music transcended craft. They created a path from one form of music, and one aspect of culture, to the other. They showed you how everything fit together.”

The movements trace the musical arc of Liston’s life, from “Kansas City Child” and “Central Avenue” to “Dizzy Gillespie,” “Randy Weston,” “Detroit/Kingston,” and “Kansas City Homecoming.” Perhaps in part because she was so private, Liston is not as familiar to average listeners as other great jazz arrangers of her era such as Gil Evans and Oliver Nelson. Bradfield hopes to help change that with Melba!, which illuminates what a remarkable individual she was in achieving such success as a woman in a man’s world and as a bold innovator with her own style and methodology.

Jazz on the Square, Knoxville, TN. The Square Room, in partnership with the Knoxville Jazz Orchestra and WUOT 91.9FM, hosts a concert series called “Jazz Lunch” on the first Wednesday of each month from noon to 1:00 pm. Each month’s program pays tribute to a different historical figure whose music made a lasting impact on jazz. Admission to the concert is $20 and includes a lunch buffet served up by Cafe 4. Tickets are available online or by visiting Cafe 4 in person prior to the show.