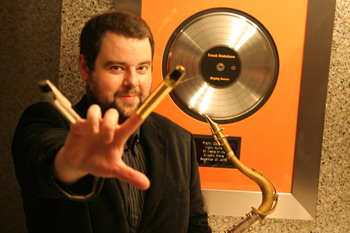 slideshow
Love Supreme Collective is the Ropeadope debut by Billboard chart- topping saxophonist Frank Catalano and longtime Smashing Pumpkins drummer Jimmy Chamberlin. Chicago-based Catalano and Chamberlin met in 1999 at the former Boulevard Cafe in Chicago's Logan Square neighborhood during a jam session that Catalano was hosting. On that night, the jam included John Medeski, DJ Logic, Steve Kimock, Les Claypool and Sugar Blue. Catalano and Chamberlin started playing together soon after for fun, mostly at each other's houses with the exception of a few Jimmy Chamberlin Complex performances.

“I have been a fan and friend of Frank's for fifteen years and I am happy we are making music together," Chamberlin says. This collaboration has enabled Chamberlin to reconnect with his jazz roots. Fans of Chamberlin's drumming will be delighted to hear him in this context, as he demonstrates an inspired range of depth in his playing. “Jimmy is my favorite drummer and I think of him like he's my big brother," Catalano says. “We played together at the Green Mill in Chicago recently and I still have the music running through my body. It was so special, words can't properly express my feelings."

While Catalano has nothing but joy and positive feelings for the music on Love Supreme Collective , this inspired album has its genesis in difficult circumstances. In 2011, Catalano sustained serious injuries after his car was hit by a drunk driver. He cites John Coltrane's A Love Supreme as the spiritual anchor during his difficult recovery. Catalano wanted to make a recording that embodied the love, thanks, and praise of A Love Supreme without copying it. Catalano was fortunate to have worked with A Love Supreme's legendary drummer, Elvin Jones, who Chamberlin cites as one of his biggest influences. As such, the passion felt for the material on this recording is easily apparent.

“This recording is about crafting emotions and feelings," Catalano says. “The way the guys set the tone and mood for each song is pretty unreal. Love Supreme Collective resembles a through composed contemporary classical piece with four movements."

At Catalano's request, Ropeadope is selling the recording on iTunes as an “all or nothing," album, because, as Catalano says, “I didn't want this work separated and fragmented. While I am very proud of my recordings for the Savoy and Delmark labels, this is the first time I used my classical composition training to frame the work of a recording. This freed me to keep Coltrane, Von Freeman and other spiritual energy near my heart and under my fingers."

Catalano entered into the process of recording this album with a distinct and inspired purpose for each track. “'Acknowledgement of Truth' takes the listener on an intense spiritual journey before finding some peace on 'Resolution of Purpose,'" Catalano says. “'Pursuance and Persistence' has many meanings to me as this is where things are coming together, life wise."

Catalano is at a stage of his career as an established veteran in the Chicago jazz scene where he often hears questions regarding the direction of his music and career: What is important? What are you working to achieve? Are you happy with your situation? What are you going after? With Love Supreme Collective, Catalano chooses to answer these questions through his music. “It is easy to say words," he says, “but to express these emotions, thoughts, feelings in an instrumental album is something else. 'Psalm for John' is probably the most special on a personal level. A psalm can help inculcate belief in divine providence into one's consciousness. Percy Jones and I are bending our bass and soprano sax notes together at the same time, without discussing it, playing off each other, as if our minds are being fed this info. We did not filter or limit the music in any way. It was a very powerful and spiritual experience. I want to thank everyone who is reading these words and checking out the music!"