Saxophonist/Composer Russ Nolan Proudly Announces the Release of His New Album, with You in Mind 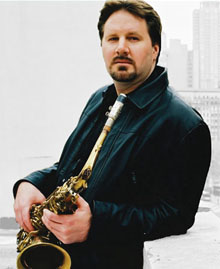 slideshow
Saxophonist/Composer Russ Nolan Proudly Announces The Release of His New Album, With You In Mind

“Two Colors, Russ Nolan's first album as a leader, was an impressive debut; With You in Mind is a flying leap. Inasmuch as it finds the saxophonist seamlessly integrating himself into a longstanding trio, the new album reminds me of some of those classic Prestiges and Blue Notes of the 1950s and '60s, on which freelance hornmen availed themselves of Miles Davis's rhythm sections." --Francis Davis (in liner notes to With You In Mind)

“Russ Nolan is a monster in a closet." “Not only is he a technical beast, but his musicianship is beyond his age." --Joshua Musselwhite, JazzImprov Magazine

On March 4, 2008 saxophonist/composer/educator Russ Nolan proudly releases his second recording as a leader, With You In Mind, featuring his engaging playing on tenor and soprano saxophones, and his singular compositions, backed by the Kenny Werner Trio, with Johannes Weidenmuller on bass, and the ubiquitous Ari Hoenig on drums. With You In Mind is the follow up release to Nolan's stunning debut, Two Colors, and from the opening notes of this recording it is clear that this rising star on the scene has once again created an album that overflows with dramatic, open-eared interplay, joy, virtuosity and expression.

Throughout With You In Mind it is abundantly clear that Russ Nolan eats, breathes and sleeps music. It is this kind of dedication and studiousness, not to mention his natural talent, that enabled him to create a recording that, is not only a thrill to listen to in, but must have been a thrill to make.

More on Russ Nolan: Russ Nolan hails from Gurnee, IL, a Chicago suburb. Through the first half of his life, it was not music that was his passion, but athletics. It was his dream to play professional sports. Only after high school was he bitten by the proverbial 'jazz bug'. This new 'infection' led him to study at the widely acclaimed music department at North Texas State University and spent his summers at the feet of Chicago saxophone Legends Joe Daley and Rich Corpolongo.

Returning home after college, Nolan was active for over ten years on the Chicago music scene, absorbing the music and rubbing shoulders with the world-class touring groups at the Jazz Showcase - as well as appearing as a sideman in the club himself on occasion; sitting in with Lin Haliday at the Get Me High Lounge and the legendary Von Freeman at the New Apartment Lounge; leading his own groups at the Bop Shop w/guitarist John McLean, the Get Me High Lounge, Martyrs and the Green Mill; collaborating with violinist Zach Brock at the Hot House, Pete Miller's, Katerina's and the Jazz Showcase; and playing in Kurt Elling's orchestra for Chicago's Millennium Celebration.

Nolan's big band arrangements of Kenny Garrett and Pat Metheny compositions (originally written for the One and Two O'Clock Lab Bands at NTSU) have been performed by various ensembles nationwide.

Always focused on musical growth, Nolan has had personal study with David Liebman, Chris Potter, Kenny Werner, and David Bloom, founder of the Bloom School of Jazz. Continuing to true his metal with fire, Russ made the trek to pay the toughest dues of all . . . joining the jazz ranks in the Big Apple. Since arriving in March 2002, Russ has begun to emerge as a bandleader, performing in various New York City jazz clubs and other venues.Russ is also a committed educator, and has had extensive tours in 2005, 2006, and 2007, conducting clinics and adjudicating jazz festivals at the college, high school, and middle school level.