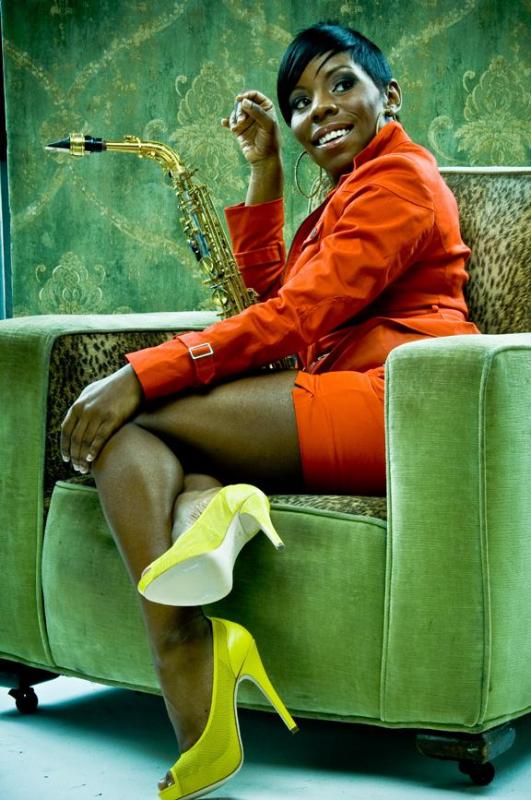 Saxophonist/Composer/Educator Tia Fuller is scheduled to perform at Dizzy’s Club Coca-Cola in New York City from Thursday, February 21 through Sunday, February 24. The performance will be in support of her recently released Mack Avenue Records album, Angelic Warrior. With performances at 7:30 and 9:30PM each evening, Fuller will be joined by special guest trumpeter Sean Jones, as well as pianist Shamie Royston, bassist Mimi Jones, and drummers EJ Strickland (February 21&22 only) and Rudy Royston (February 23&24 only).

Fuller’s third release on Mack Avenue Records, Angelic Warrior, marks her deep-rooted evolution as an instrumentalist, composer and bandleader. After five years in Beyoncé’s band, the pop diva’s attention to detail in the studio rubbed off on Fuller. She has since developed a heightened focus in the editing, mixing and mastering process of Angelic Warrior, as the producer. And as the Assistant Musical Director for Esperanza Spalding’s Radio Music Society touring band, Fuller applies her pop and jazz chops on behalf of some of the hottest artists in music today.

Fuller’s aesthetic statement on the record is grounded in a jazz mode of expression that embraces both the classic and the contemporary sounds surrounding her. It’s no mistake that artists from Ralph Peterson, Jr. and Esperanza Spalding to Terri Lyne Carrington and Beyoncé include her instrumental voice and vision in their work. With this recording, Tia Fuller surfaces clearly, rising to the top of her generation of musicians. Fusing traditions, styles, and unafraid of genre boundaries, Fuller’s music transgresses the musical frontiers of today, manifest to last well into the future.

On Angelic Warrior, Fuller makes an aesthetic statement that’s fully her own. The album celebrates the peaceful demeanor of the ‘angel’ and the drive and determination of the ‘warrior’ spirit within. Fuller says, “While writing this album, I was balancing different aspects in my life and career…trying to pull from the ‘warrior’ energy, while remaining graceful in my spirit. We can all celebrate the Angelic Warrior within ourselves by trusting in our vision, doing the work and maintaining a level of peace.” In addition, Angelic Warrior pays homage to the angels in Fuller’s life: her family and friends. “I wanted to celebrate core individuals who serve as pillars of inspiration,” she says.