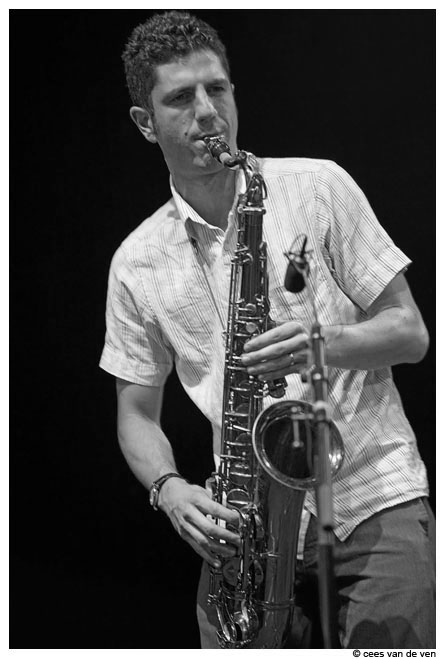 slideshow
Saxophonist and composer Dan Blake “regards tradition as a welcoming playground best approached with a sense of wonder and adventure." —Andy Gilbert, The Boston Globe

“He will do justice to any musical situation." —Danilo Pérez

“Thank you Daniel Blake for un-packaging the avant-garde gracefully and soulfully." —Esperanza Spalding

This piece, The Dust Moves, is like trying to remember a dream, that moment when things seemed so clear, so still, yet just out of grasp. It's almost as if another kind of eye did the seeing...

I have been searching for sounds and images that can encapsulate what this other eye sees—a sunrise that projects myriad shapes onto the ground, the blink of an eye making us blind to the world for an instant, the dust dancing in the rays of light—for me, these things are always moving, yet they are also approaching stillness...

As a composer and saxophonist, my aim is to establish and explore a personal and flexible sound world that is fundamentally connected with the art of improvisation, which for me is the most basic act of making music. For several years, I have been working on a series of solo saxophone works that have become the basis for my compositional vocabulary, and have always been accompanied by specific visual ideas that I am realizing for the first time here. I think of the animations as visual cues - both to the performers and to the audience - revealing just one more part in an impossibly rich creative network connecting us all. But what really interests me most about animation is that moving objects are always depicted within stillness...

This paradox of motion within stillness is fascinating to me, mostly because it serves as a visual metaphor for how I experience music. The idea of motion in music can apply at many different levels, and experiencing music as “moving toward stillness" presents an interesting compositional challenge, one where I must realize ideas that are quite personal and mercurial in nature. Thanks to the formidable and vast musical abilities of the Mivos Quartet, http://www.mivosquartet.com, I have been able to more fully realize the compositional possibilities for my solo material without losing the aspect of spontaneity that has come to define my work. This yields another layer of motion, when my role as the “composer" shifts toward one of facilitating interaction within the materials, flowing in and out of the textures freely, and returning the work to the original voice. In this way, the music continues to expand, continuously moving.

The Dust Moves enjoys support from the Jerome Fund Commissioning Grant, as well as Meet The Composer's CAP fund. We successfully completed two open rehearsals at Fountain Studios on February 14 and May 27, 2013 where a small audience was invited to give feedback on the audio-visual experiment. We look forward to a full premiere of the work at Roulette, December 8, 2013.

Most artists who record an album as enthusiastically reviewed as The Aquarian Suite (2012), saxophonist Dan Blake's scintillating up-to-the-minute take on post-bop - “one of the most ridiculously satisfying discs we've heard in some time," crowed the Boston Phoenix - would be eager to follow it up with something in the same vein. And there's a good chance that when Blake is ready, he will record a sequel of sorts - perhaps with another “chordless quartet." But for the Brooklyn artist, whose ridiculously wide-ranging career has included significant work with great artists as different as avant guru Anthony Braxton, Grammy-winning jazz-pop star Esperanza Spalding and Grammy-nominated guitarist Julian Lage, there were compelling reasons to go in other directions.

Collaborating with the Mivos Quartet on a work that combines improvisation with contemporary composition as well as 3D graphic animations designed by the composer, “is stretching me to the end of my creative abilities," Blake said. That's a good thing for an artist, recently dubbed a “virtuoso" by The New York Times, and whose music has won the support of the Jerome Fund, New Music USA, and ASCAP. “Collaborating is the single most important thing to me," said the New Jersey native, whose Ph.D. dissertation was based on interviews with outstanding improvisational musicians with whom he also collaborates, a list that includes Mary Halvorson, Ricardo Gallo, and Peter Evans. (He was supported by the Baisley Powell Elebash Fund for ongoing research into New York's improvised music scene.) “When you work with people, you inhabit some sort of world together, this feeling of connection," Blake said. “It's not about imposing an aesthetic ideal. Music represents the value of those relationships. It makes a powerful ethical statement."

More on the Mivos Quartet

The Mivos Quartet, an “accomplished, admirably broad-minded young string quartet" (The New York Times), is devoted to performing the works of contemporary composers, presenting new music to diverse audiences. Since the quartet's beginnings in 2008 they have performed and closely collaborated with an ever-expanding group of international composers who represent multiple aesthetics of contemporary classical composition. They have appeared at venues including The Guggenheim Museum, Kennedy Center, Zankel Hall, MoMA, The Stone, Issue Project Room, and Roulette, Mivos was one of five groups selected for the Young Ensembles Fellowship at the 2012 Darmstadt Internationalen Ferienkurse für Neue Musik, where they were awarded a Fellowship Prize for Interpretation and invited back for the next Darmstadt Festival in 2014.

In addition to their international performing activities, Mivos is active in education, and has conducted workshops at CUNY Graduate Center, Brooklyn College Conservatory of Music, Royal Northern College of Music (UK), Yong Siew Toh Conservatory (Singapore), the Hong Kong Art Center and MIAM University in Istanbul (Turkey). The quartet also runs the annual Mivos/Kanter String Quartet Composition Prize, established to support the work of emerging and mid-career composers and to encourage continued interest in new compositions for string quartet. Beyond expanding the string quartet repertoire, Mivos is committed to working with guest artists and exploring multi-media projects involving live video and electronics. Improvisation is also an integral part of their performances and has led to collaborations with artists such as Dan Blake, Ned Rothenberg, Chris Speed, Timucin Sahin and Nate Wooley. Mivos' performance of Ned Rothenberg's Quintet for Clarinet and Strings, “played with spontaneity and dexterity" (The Strad Magazine), was released on John Zorn's Tzadik label. Members of the Mivos Quartet are all graduates of the Master's in Contemporary Performance degree program at the Manhattan School of Music.