SOURCE: ALL ABOUT JAZZ
December 19, 2014
Sign in to view read count 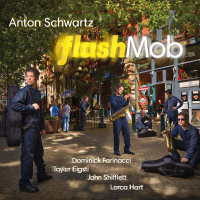 slideshow
Don't miss one of the best jazz CDs of 2014!

Available for a full week on the All About Jazz home page. Look for the Flash Mob SoundCloud player directly under the Featured Stories box

Anton Schwartz's first solo release in seven years, Flash Mob, had a long Top Ten run on the U.S. Jazz Radio charts and made DownBeat's Best of 2014 list. And it's no wonder why—it's just so much fun to listen to, for the trained jazz ear and the novice alike.

“★★★★… Just about all of these songs have the kind of shapely themes you can imagine other players wanting to cover." —Jon Garelick, DownBeat

“A superior tenor-saxophonist from Northern California, Anton Schwartz has his own sound and a fresh conception of forward-looking hard bop… Schwartz has created a CD worthy of the best of 1960s Blue Note… there are several songs on this set that deserve to become future standards." —Scott Yanow, L.A. Jazz Scene

“The music is imbued with spontaneity, precision, and fun." —Steve Griggs, Earshot Jazz

“Blazingly hot stuff throughout, Schwartz and company serve up some of the best ensemble playing around and make it sound way too easy. A winner throughout." —Chris Spector, Midwest Record