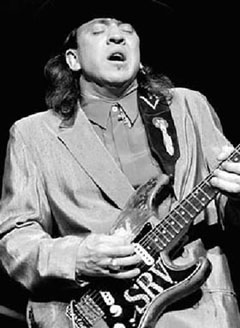 Yesterday marked the 20th anniversary of Stevie Ray Vaughan's untimely death, but so overstuffed with life is the music he left behind that it hardly seems possible that he's gone. Texas born Vaughn exuded red hot passion and a grabbing, exciting gusto to get into it, whatever “it" might be. When he arrived on the national scene in the early 1980s he re-infused the blues with a rawness and vitality that the increasingly slick genre was sorely in need of. And then he took it much, much further, offering his painfully honest, heart touching, utterly wounded story in songs that tear one up to this day. There was also the good time, boot scootin' Dallas boy who reminded us how to boogie, but it's the sharp truthfulness of his longing, his admittance to personal failings and his subsequent rise into hope and rejuvenation that makes his work endure as it has.

For myself, Stevie Ray Vaughan is crystallized in a single night and even a single moment during that evening. It was New Year's Eve 1987 at the Henry J. Kaiser Auditorium in Oakland, CA. A clean & sober Stevie Ray and the lock-tight Double Trouble hit the midnight hour charging in hard party mode, the capacity crowd already well warmed up by The Paladins and Tower of Power. But as the minutes crept into the first day of 1988, Vaughan took it down—way down. Though a native Texan, Stevie Ray had become a fixture in Oakland and around the Bay Area, and for a spell made his serious fans, myself included, seriously worried about his health and future. His triumph over his demons and subsequent commercial and artistic success was something felt in a hearty, happy way by those of us who'd watched him evolve for years. During a wrenching version of “Life Without You," he began to testify in his quiet way about just how lucky and blessed and goddamn pleased he was to be here doing what he was doing. It was as simple and direct an expression of profound gratitude as any person has ever uttered, and he followed it with a guitar solo that still raises hairs on my neck. There wasn't a dry eye in the house and the roar that followed the final notes shook Heaven's floor.

In some ways, this moment taps some of the power and glory of Stevie Ray Vaughan, but also just as importantly, his warts-and-all humanity and its catalyst to examine and live our own lives with the same fortitude and honesty. We are stronger than the weakest parts of us, and Stevie Ray knew that. We are the blessed ones for the gifts, insights and music he shared. (Dennis Cook)

We begin appropriately enough with a searing version of “Life Without You." As he sings, “The angels have waited for so long, now they have their way."

This is a LOT of guitar firepower on one stage—Stevie Ray, Jimmie Vaughan and Jeff Beck with singer Angela Stehli in rare Honolulu performance.

One of Stevie Ray's longtime songwriting foils was Doyle Bramhall, who was also a running partner of ZZ Top's Billy Gibbons & Dusty Hill as a teen. This is one of better Vaughan/Bramhall compositions off In Step, Stevie Ray's last studio release with Double Trouble before his death.

This triple threat of Vaughan, B.B. King and Albert Collins doing damage to this signature blues was captured at Jazz Fest in 1988.

So synonymous with electric guitar was Vaughan that it came as a surprise to some that he absolutely killed on acoustic in what is arguably the finest installment of MTV Unplugged next to the iconic Nirvana performance.

Hands down, one of the finest slow blues ever, and this version adds fellow Texas bluesman Johnny Copeland for extra spice.

Tough as ever, this one was especially refreshing on the MTV of 1985.

This one always kicked like a mule, and this take from the Loreley Rockpalast Festival, Germany in 1984 is no exception.

Many try to pull on Hendrix's velvet trousers, so to speak, but few have done so with as much authority and authenticity as Stevie Ray. Here's a double shot of SRV doing Jimi. Catch the little bit of “Third Stone from the Sun" he throws in to “Little Wing."

We end upbeat, hopeful that wherever SRV is now that the house is shakin' real good every night.