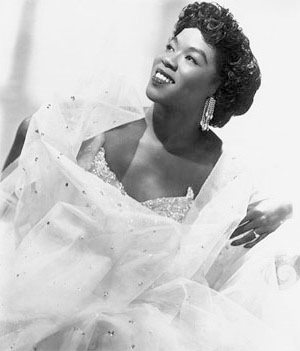 Sarah Vaughan was already considered one of the greatest singers of her era when she signed with Mercury Records in 1954. She was given the charge to record jazz for the subsidiary EmArcy, pop for the main label Mercury, though the assignments sometimes overlapped. No matter the imprint, during the decade Vaughan and an incredible array of talented musicians created six of the greatest jazz vocal albums of all time. These jazz vocal classics are all newly remastered and included in the 4-CD box set Divine: The Jazz Albums 1954-1958, which also includes a 4,000-word essay by award-winning writer Will Friedwald, detailed track annotations and uncommon photos, as well as faithful reproductions of the original album jackets and their rare EP counterparts.

The albums in the set are:

• Images, an original 10-inch album that included her signature tracks “Lover Man” and “Body And Soul”; when the album was reissued a few years later as a 12-inch LP the label added five tunes from the sessions, including “All Of Me,” and re-named the album Swingin’ Easy. All of the extra Swingin’ tracks are included on the box set.

• Sarah Vaughan, a self-titled album famous not only for Sarah’s great voice, particularly on “Lullaby Of Birdland,” but also for the accompaniment by Clifford Brown, Herbie Mann and Paul Quinichette.

• In The Land Of Hi-Fi, featuring soloist Cannonball Adderley and definitive versions of “Over The Rainbow” and “How High The Moon.”

• The live At Mister Kelly’s, a successful outing featuring not only the original album but all 12 bonus tracks from the shows previously available only on a Japanese import, now out of print.

• Her second live LP recorded as a follow-up to Mr. Kelly’s, After Hours At The London House, with Count Basie’s horn section and an adoring audience.

• No Count Sarah, featuring the full Basie band without their leader – hence the album’s title – and astounding vocalese from Sarah, whether in “Smoke Gets In Your Eyes” or “No ’Count Blues.”

Divine: The Jazz Albums 1954-1958 is housed in the acclaimed Verve Select mini-album packaging, which features a hard-cover book with the aforementioned essay, photographs, album reproductions and more.