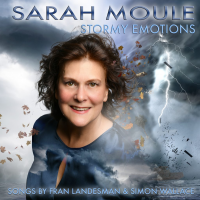 slideshow
Back in February 2014, I posted the following: “If many of today's jazz musicians and singers lack anything, it's curiosity. Talent they've got, but a deep interest in the past beyond what they already know seems alien to their approach... What's hurting the music isn't a lack of venues or long solos. It's a lack of imagination and a stubborn refusal to explore the music's history and re-interpret compelling, overlooked standards. For example, the music of Tommy Wolf and his range of lyricists, including Fran Landesman, could use a revisit."

I didn't know English vocalist Sarah Moule back then, but it seems we've been on the same page for some time. Her gorgeous new album is Stormy Emotions: Songs by Fran Landesman & Simon Wallace. Landesman was an exquisite lyricist who moved in 1950 to St. Louis, Mo., with her husband Jay, where he started the Crystal Palace nightclub. Fran began writing song lyrics in 1952. When she finished Spring Can Write You Up the Most, the Crystal Palace's house pianist Tommy Wolf wrote music to her words.

Then one night, Wolf's pals, Jackie Cain and Roy Kral (above), just happened to be appearing in town. As Jackie told me in a 2009 interview, they dropped by the club and Tommy shared the song with them. Jackie an Roy were the first to record it in 1955 and the rest is history. Landesman then wrote a long list of sophisticated jazz standards with Wolf that come with a knowing wink, including Ballad of the Sad Young Men, How Do You Like Your Love, Say Cheese and Listen Little Girl.

In 1994, Landesman met British composer Simon Wallace (above) and collaborated with him for the remainder of her career on upward of 300 songs. Simon is a celebrated British composer with a long list of songs to his name and themes for films and BBC television shows.

Then in 1999, Landesman (above) worked closely with singer Sarah Moule. In 2002, Sarah released an album of Landesman-Wallace collaborations on It's a Nice Thought. Sarah's next three albums featured 27 more Landesman-Wallace songs. Did I tell you that Sarah just happens to be married to Simon Wallace?

Which brings us to Stormy Emotions, featuring another dozen glorious Landesman-Wallace compositions. Sarah has such a warm, sophisticated voice and just the right phrasing for this material. The songs are conversational but singing them requires a stage performer's sensibility. They're best served vulnerable, which Sarah manages with savvy yearning. Simon's music changes like an English sky and keeps the ear engaged, whether it's a waltz (Nothing Is Mine Now), a mid-tempo blues (Truly Unruly), a ballad (After the Fall) or a whimsical song with a twist (On Hold/Living in Limbo). Landesman's lyrics are precious.

Sarah and Simon make a terrific couple. It's almost as if Landeman's lyrics were written to keep them together and in love. Landesman said it best: “ I got lucky meeting Simon. That he married Sarah Moule was a bonus. She’s the jazz vocalist par excellence."

JazzWax clips: Here's a promo clip for the album...