Santana Lands February 21 in a Captivating Set of Greatest Hits! 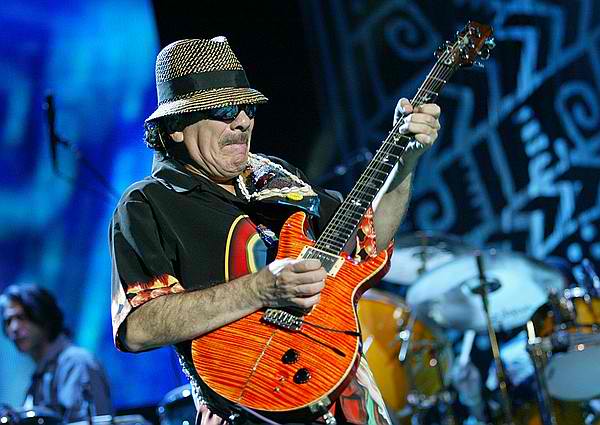 slideshow
Eagle Rock Entertainment will release Santana Live At Montreux 2011 on a 2DVD set & Blu-ray in a exhilarating set of jazz, Latin, funk, soul and rock 'n' roll. The 23-song show weighs heavily on the side of the songs that fans of the Rock and Roll Hall of Fame guitarist (inducted in 1998) have loved over the years.

Filmed in high-definition and recorded in DTS-HD Master Audio, Dolby Digital 5.1 and LPCM Stereo, it's a total jam-packed evening of percolating percussion, soaring lead guitar solos and the kind of funky bass/drum action that has kept this band in the forefront of popular music for over 40 years.

Live At Montreux 2011 is a career-spanning show that covers all the bases: from Tito Puente's “Oye Como Va," Fleetwood Mac's “Black Magic Woman," Babatunde Olatunji's “Jingo" and Willie Bobo's “Evil Ways" to John Coltrane's “A Love Supreme." Carlos Santana has always had a knack for making his cover versions become spectacularly his own. His interpretive flair reached its zenith with 2010's Guitar Heaven which contains his scintillating take on Cream's “Sunshine Of Your Love." Add his numerous originals, including “Smooth" and “Maria Maria," his signature style of inspired and spiritual guitar playing and you have the kind of DVD that burns with intensity.

Extras include interviews with Carlos and Cindy Blackman Santana, and a very special peek behind-the-scenes. Guest artists include the husband/wife guitar team of Susan Tedeschi and Allman Brothers Band Derek Trucks as well as drummer/wife Cindy Blackman Santana. Over three hours long, this is the Santana concert his fans have been waiting for!

For forty years and as many albums later, Santana has sold more than 90 million records and reached more than 100 million fans at concerts worldwide. To date, Santana has won ten Grammy® Awards, including a record-tying nine for a single project, 1999's Supernatural (including Album of the Year and Record of the Year for “Smooth"). In 1998, the group was ushered into the Rock and Roll Hall of Fame, whose web page on their induction notes, “Guitarist Carlos Santana is one of rock's true virtuosos and guiding lights." Among many other honors, Carlos Santana has also been cited by Rolling Stone as #15 on their list of the “100 Greatest Guitarists of All Time." His last CD, Guitar Heaven... The Greatest Guitar Classics of All Time (Arista) was released in 2010. Celebrating that chart debut, Santana joined the ranks of the Rolling Stones as the only musical act in chart history to score at least one Top 10 album in every decade beginning with the 1960s. “Guitar Heaven" was Santana's 29th Billboard Top 200 charting release, 12th Top 10 album debut and third Top 10 debut in the past 7 years.