Samantha Sidley Uses Her Playful 'Vocal Weightlessness' To Ask You To 'Listen!!' On Latest Single From Upcoming Debut Album

Ms. Sidley has a sweet, girlish voice, so light that at times it almost disappears. But that vocal weightlessness is somewhat deceptive. She holds in reserve an airier version of the wail deployed by Rickie Lee Jones and Laura Nyro, which injects blushes of emotional color into her mostly playful singing. —The New York Times 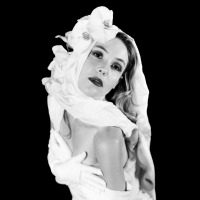 “We really wanted a song with a ‘refrain,’ a rubato intro that I could play with, like a classic early jazz song,” explains Los Angeles native Samantha Sidley of the latest single from her upcoming debut album Interior Person, out September 13, 2019.

“‘Listen!!’ is what came out! I think originally when I was performing this song, I was thinking about all the mansplaining I’ve had to endure over the years, or just turning on the radio and having the unfortunate experience of hearing our current president, but now when I sing it, I’m often just talking to myself, telling my brain to quiet down. Stop worrying. Enjoy the life that is here for you. Enjoy everything. I enjoy a cheeky witty lyric and I do because it is almost always is supported by a deeper intention.”

The “cheeky, witty” song was written by Alex Lilly, and Sam’s wife, Barbara Gruska, who also produced the album, which was recorded in a studio constructed in Sam’s childhood bedroom.

“Sam, Alex and I share a deep annoyance with people who don’t listen,” Gruska jokes about the song’s story. “Whether they’re not listening to other people’s words, the real meaning beneath peoples words, nuance in music, or nuance in everyday life, we’re irritated by it all! Maybe ‘Listen!!’ is a thoughtful person’s revenge song? Or maybe it’s a useful tool: If you know a steamroller and share this song with them, maybe they’ll listen!!”

Lilly addresses the technical aspect of the songwriting, saying, “One of the aspects of writing for Sam that has been so much fun is that the words and melody come first in the writing process. I had never done this before. With other projects, music has always been first and words later. This song was particularly fun to write because it came so quickly. We sat at my piano in my apartment, playing and singing at each other, sometimes loudly when we had a good idea or at least thought we did. Actually it was the odd timing we were chipping away at mostly. Getting just the right feel out of shifting the time signatures.”

Lilly continues, “In the beginning, I just had the first four lines, that little horn part idea and the ‘listen’ melody. It sounds a little geeky but writing the song was like a conversation with Barbara where we finished each other’s lines. Barbara came up with most of my favorite lyrics from the song including, ‘Put your talk on the chopping block.’ It was such a blast because the sillier, the better. We were trying to out-silly each other. And you’d think ‘save your spit, cuz there’s a drought’ shouldn’t be in a song, but it absolutely should, because Sam loves cartoonish humor as much as us and performs it with perfect outrageous class!”