Sidley’s quietly radical debut album, 'Interior Person,' is premised on the idea that a listener in 2019 shouldn’t have to decode a love song to hear herself in it. A sweet, funny, tastefully arranged vocal-jazz disc about same-sex romance. —Los Angeles Times, Top 10 Albums of 2019 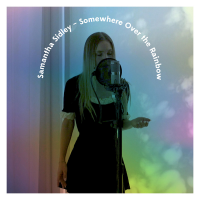 To celebrate the occasion, Sidley has recorded a stirring vocal-only performance of one of her favorite childhood songs, “Somewhere Over The Rainbow," the signature song from the iconic film, “The Wizard of Oz".

Scroll down to hear Sidley's cover of “Somewhere Over The Rainbow" and to view the video for “I Can't Listen" from her debut album Interior Person, recently named one of the Top Ten Albums of 2019 by The Los Angeles Times.

Samantha Sidley is a jazz vocalist, born-and-raised in Los Angeles, and she likes girls.

The words “I like girls” are the first thing you’ll hear when Sidley’s debut album Interior Person (Out Now, Release Me Records) opens. The song is an unassuming anthem, a future standard for an evolving culture. It’s also a fun and funny ice-breaker that you’ll sing along with.

“I Like Girls” is a peek into what plays out as a meticulously crafted debut album featuring Sidley’s beautifully trained voice taking confident ownership of songs written for her to sing by some of the most important women in her life.

These other “girls” include fellow musicians Inara George, Alex Lilly, and Sidley’s “Top One” favorite musician of all-time, her wife, Barbara Gruska.

“Inara and Alex and Barbara wrote songs that are all very personal to my story – they literally are my story – and from my lesbian perspective, which I appreciate so much,” Sidley says. In addition to co-writing many of the songs here, and playing drums (masterfully) on many of the tracks, Gruska also produced Interior Person in a studio constructed in Sidley’s childhood bedroom.

“My whole life was a song,” Sidley says of her childhood. “If I looked at a tree, it was a song. If I felt happy, sad, joy, it was a song. When I first heard Judy Garland in ‘The Wizard of Oz,’ I remember thinking: ‘I understand.’ I’ve always considered myself an interpreter, which is sort of and undervalued art form. I like to take a song and make the story true for me.”

Sidley soon discovered Aretha Franklin, Billie Holiday, soul music in general, and her own personal “soulfulness” itself. You know, like all seven-year-olds do. Later, considering how annoyed 11-year-old Sidley was when her vocal instructor wouldn’t allow her to sing Holiday’s “Lover Man (Oh Where Can You Be)” at her first recital, it all made perfect sense.

A decade later, Sidley got to sing whatever she wanted, performing at NYC’s legendary Oak Room at the Algonquin Hotel, where she lived in Dorothy Parker’s room, listened to a lot of Anita O'Day and Ella Fitzgerald, and landed a rave review in The New York Times.

“She knows exactly how I express myself and what my intentions are,” Sidley says of her working relationship with Gruska. “Collaborating on this record has actually been a much longer collaboration of us getting to know each other.”