SOURCE: ALL ABOUT JAZZ PUBLICITY
November 21, 2007
Sign in to view read count 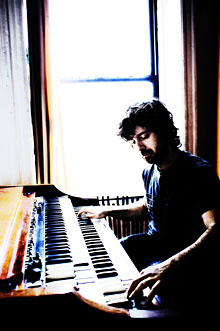 
One of the most distinctive voices among a new breed of hammond b-3 jazz organists, Sam Yahel is a down beat critics poll winner who has worked with artists ranging from Joshua Redman and Maceo Parker to Norah Jones and Madeleine Peyroux. but he shines brightest as the leader of his own organ trio, and especially on his fourth and latest outing as a leader, truth and beauty (Origin Records). In the spring of 2007, the Sam Yahel trio was the special guest of Steely Dan on the latter's eastern US tour. Now Sam arrives at Jazz Standard with a killer new lineup featuring guitarist Lionel Loueke and drummer Francisco Mela.

One of the more distinctive voices among a new breed of Hammond B-3 organ players on the jazz scene, Sam Yahel has earned the top spot in Down Beat's annual International Critics Poll as a Talent Deserving Of Recognition for the past four consecutive years.

But it has been as a solo artist in his own right that Yahel has made his most personal statements as both composer and player.

On Truth and Beauty, his fourth outing as a leader, Yahel joins with longtime colleagues Joshua Redman and drummer Brian Blade in rekindling the potent chemistry they generated as Yaya3, a collective group that was an outgrowth of a residency they had at Small's nightclub in New York. “I'm proud of that record. I like Yaya3 (which was released by Warner Bros. in 2003). But at the same time I was always thinking about doing something purely of my own."

And while Yahel had previously released three recordings as a leader -- 1998's Searchin', 1999's Trio and 2000's In The Blink of an Eye -- his current outing is his strongest to date. “This record is not so much about the straight-ahead swinging undercurrent of the rhythm section," says Sam. “These days I feel like jazz has absorbed more world music influences. I hear Brazilian, African and Cuban music elements starting to seep into the mainstream jazz scene and I find myself drawing from those influences more. And for me, the organ is the perfect instrument to implement that kind of thing because you can really get rhythmic and percussive on it, you can evoke images and sounds just as easily as swinging. And although I'm a big fan of straight ahead swinging music and I still play it with pleasure, I think that this record is more of a foray into the other side."

With Truth and Beauty, Yahel once again stakes out his own territory on the Hammond B-3 organ while taking another important stride as a bandleader and composer.