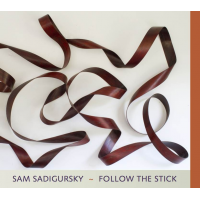 slideshow
The spirit of the organization is firmly rooted in Brooklyn. All of the members reside there, and they wanted to give a nod to the vitality of its scene. —The Wall Street Journals

“Entrancing... hypnotic... a musical world full of riches and you should partake in this feast." —Richard Kamins, courant.com

Sam Sadigursky, a first-call sideman and bandleader across a broad spectrum of music, and an award-winning composer (Chamber Music America, The Jerome Foundation), debuts a brand new band on his new recording, Follow The Stick, to be released on Brooklyn Jazz Underground Records on November 6, 2015. Follow The Stick is a sophisticated collection of original music from one of the most respected musicians on the New York scene. It is also Sam's “coming out party" as a clarinetist, which he has put front and center as of late. He explains, “It was a natural evolution in many ways, both practically and creatively. I started on saxophone, but began studying clarinet pretty early as well ­ my father is a classically trained clarinetist and accordionist from the Soviet Union, who now plays mostly Klezmer and Eastern European folk music. I remember interviewing him for a 5th grade project and asking him what some of his dreams in life were, and he told me about wanting to learn to play jazz clarinet, something he's always loved. About four or five years ago something really clicked for me with the instrument and I've put most of my energies into it, and people have been calling me more and more for my clarinet playing since then. Unlike the endless sea of jazz saxophone players, there aren't that many improvisers today playing clarinet at a high level, so it's allowed me to really create a little niche for myself, and creatively, I feel there's so much more room to explore with it. I really feel that it's my voice as an instrumentalist."

This new recording follows up Sadigursky's five acclaimed The Words Project albums on New Amsterdam Records, where the music is based on text and poetry. With Follow The Stick we now have an opportunity to hear why Sadigursky is considered a “musician's musician", and so revered as a collaborator/sideman. “The Words Project material sort of allowed me to hide behind the singers. There's not that much stretching out on those albums, since I was always conscious of this larger compositional scheme, being faithful to the text and not allowing it to get overshadowed by the music," said Sadigursky. “We stretch on this one."

The music on Follow The Stick is comprised of new, and some not so new, original compositions, plus a modern take on the Glenn Miller hit, “String Of Pearls". Originally, Sadigursky planned on writing all new music for this group; things with a more overt sort of swing associated with this instrumentation (clarinet, trumpet, vibraphone, piano & drums), such as “Do The Dance", but, “when I started to fish through old notebooks for ideas I found so many nearly-completed old tunes of mine that never had life breathed into them. Having focused on those vocal albums for nearly ten years, there is still a huge backlog of instrumental material that I'm sifting through. However, I did write some new tunes for the group, things like 'Deadly Sins' and 'Math Music', and these might better reflect my thinking today - lots of meter changes and metric modulations - where many of the older tunes are more lead-sheet oriented and open," explained Sadigursky.

“Follow The Stick" is musician's slang for following a conductor, but it also applies to the clarinet, which has been subjected to a host of (mostly) derogatory nicknames, due primarily to its unforgiving nature as an instrument (i.e. the licorice stick, the agony stick, etc.). “The clarinet is such an unyielding instrument - the technical difficulty of it can be really controlling; as a player you often have to follow wherever it wants to go. There's just a lot more to trip over technically on it. Really though, I just liked the sound of those words, their directness and the sarcastic suggestion of dictatorship, which is of course so counter to music­making. Plus, I wanted this to be a real band, so I figured the first thing that any band needs is a name," said Sadigursky.

The Follow The Stick band began as a trio featuring Bobby Avey on piano and Jordan Perlson on drums, an instrumentation inspired by the great clarinet trios of the '40s led by Benny Goodman, which didn't have a bassist. “Bobby Avey is really the whole package ­ he plays the whole piano with a real sound, has such a compositional sense, and he's an instigator, totally fearless, something I really value in the people I play with. His left hand is so developed that he fills the space left in the group by not having a bassist so naturally, without ever slipping into cliches," commented Sadigursky. “I heard Jordan on Bobby's records, and was really blown away. I had known him for years through his playing with Becca Stevens (who is on several of The Words Project albums), so I called him for one of the informal sessions with Bobby. What I didn't know was that Bobby and Jordan grew up playing together in Pennsylvania, so they go back a long time. It felt like a band to me from the first moment, and immediately after that session I remember taking them out to lunch and basically getting down on one knee and asking them to be part of something more ongoing. Jordan is so well versed in so much music ­ he can play the hard stuff, but then is one of the best rock drummers I've ever heard. 'Math Music', the last tune on the album, is basically a big ol' feature for him, and he kills it."

After a few gigs with the trio, Sadigursky was looking for a bit more color for the group, a musician who could thicken the textures and also give the piano some support during solos, and support the melodic content as well. He elaborated, “I thought about which instrument I would like to try adding, and vibes came to mind first, since they have such a history alongside the clarinet - Benny Goodman/Lionel Hampton, Artie Shaw's Gramercy Five, Buddy DeFranco/Terry Gibbs, etc. I had never played with Chris Dingman before, but remember being really impressed by his first album, Waking Dreams. After doing a session with him I knew he was the guy. It takes a lot of sensitivity for a vibes player and a pianist to play well together, and it seemed to come so easily for Chris and Bobby. One of my favorite parts of the record is the extended intro they play to 'Heart' ­ they sound like they've been playing together for years." Boston-based trumpeter Jason Palmer plays on five tracks. Sadigursky had a trumpet player in mind for some tracks, and was blown away by Palmer's playing on a European tour they did with Darcy James Argue's group. “It's rare that I hear a trumpet sound that I love, and Jason's gives me goosebumps every time I hear it," said Sadigursky. Ljova plays viola on just one track, “Looks Can Be Deceiving," an open sketch with no written melody, just a sequence of chords and a vague notion of how they should be played. “Although he's not a jazz improviser, his sense of melody is so great, and I love the sound of the viola, it has a very similar ruminative, dark quality to the clarinet. I love how they sound together."

“In addition to all the different folk traditions that the clarinet is part of, there's such a great tradition of jazz clarinet that I'm still in the midst of discovering. I'm amazed at how much of it goes unnoticed these days - these clarinet greats were so prodigious. However, having come up as a saxophonist listening to Coltrane, Rollins, Henderson, Lovano, etc., I have all these other sounds in my head as well - you play any of that stuff on the saxophone and most people have heard it a thousand times, but play those influences on the clarinet and it actually sounds pretty fresh. To me, at least."

More on Sam Sadigursky - Since moving to New York in 2002, Sadigursky continues to make his mark both as a leader and sideman. His series of albums of original music based on poetry and text entitled The Words Projecthave been acclaimed internationally. Noted music critic Steve Smith called them, “compelling and touchingly intimate...that rare anomaly: a jazz-and-poetry record that sounds utterly natural and convincing", and went on to name Sadigursky's debut album as one of Time Out New York's “Top Ten Albums of 2007". The New York Times has called them “gracefully high-minded explorations of poetic form." Sadigursky has toured and recorded as a saxophonist and clarinetist with artists such as Brad Mehldau, Lucia Pulido, Gabriel Kahane, Tom Jones, Edmar Castaneda, Linda Oh, The Mingus Orchestra, Jamie Baum Septet, Ljova, Pablo Mayor's Folklore Urbano, La Cumbiamba eNeYe, and has been nominated for two Grammy awards for his work with Darcy James Argue's Secret Society. As a composer, he has written for film and modern dance and has also published three books of original etudes for clarinet and saxophone. Sadigursky has appeared at some of the world's most prestigious venues and festivals, has performed for numerous Broadway shows, and appears on over twenty-five albums as a sideman.