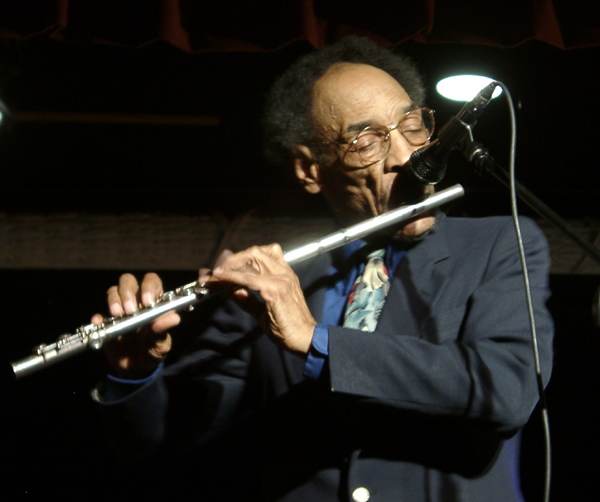 slideshow
When composer and multi-instrumentalist Sam Rivers (bio in pdf) moved to Orlando, Florida in the early 1990's, he had no intention of retiring. Soon the cream of the crop of the Florida improvised music scene began to gravitate around Rivers and a big band playing his intricately progressive, yet accessible charts began to emerge. After a brief moment in the sun, recording two star-studded orchestral albums for RCA, Rivers began to concentrate on the Florida ensemble, documenting them on the self-released album Aurora, and now releasing this comprehensive three disc collection of original compositions and arrangements through the specialty label Mosaic Records. Rivers' large band writing is thoroughly modern and quite frequently explosive with intricate orchestral arrangements making way for powerful instrumental solos. Discs one and three (sub-titled Offering and Edge) were recorded live, and showcase a medium sized band as a powerhouse ensemble, playing with a muscular bravado and soloing with elan, the rhythm section plays with a funky depth, building power from the ground up and giving a firm foundations for the riffing horns and soloists to blast off from. Disc two (sub-titled Progeny) is a special very large version of the orchestra recording in the studio, playing with great depth and texture that that extra musicians supply. The arrangements are particularly lush, nearly Ellingtonian at times with Rivers sticking to tenor saxophone for the majority of his solos, as opposed to playing a lot of soprano saxophone on the live discs. There's a great quote from the liner notes (typically excellent, up to Mosaic's high standard) where Rivers says “I don't know how to explain it, but at 87, I have greater musical powers than I did when I did when I was 21." Listening to the power and sustained exuberance on this set you will certainly be inclined to agree. Sam Rivers and the Rivbea Orchestra—Trilogy: Mosaic Records.