SOURCE: SUNNYSIDE RECORDS
May 24, 2014
Sign in to view read count 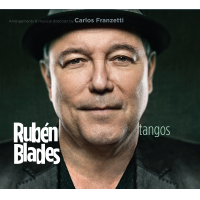 The best songs are those that provide messages that reach beyond the genre into which they are born. There are lyrics that can move people deeply, even when the composer and listener are separated by oceans.

The tremendous poet, composer and actor Rubén Blades is the sort who can plumb the depths of human emotion. Over his industrious and varied career, Blades has been a voice of passion, awareness and social consciousness throughout the Spanish-speaking world. He also possesses a wide-ranging interest in ideas and art, which has led to his involvement in projects with intriguing musical blends, including his new recording Tangos, a fascinating partnership of Blades’s classic salsa compositions with Argentinean tango.

Blades’s interest in tango music led him to reach out to his long time friend and collaborator Carlos Franzetti. Both were intimately involved in the New York Latin jazz and salsa scenes of the late 1970s and early 1980s and they befriended each other while working on a number of recordings, including the massive releases of Siembra (1978) and Maestra Vida (1980) and the music for the films Beat Street (1984) and Q&A (1990).

The initial idea for a collaboration using tango material was proposed nearly a decade ago but plans were delayed while Blades served as the Minister of Tourism for his native Panama from 2004 to 2009. Blades never forgot the idea and he began to hint at a possible tango project with Franzetti while touring Latin America shortly after his term ended.

Blades’s hints led to an invitation from Gustavo Mozi for the two to close the World Tango Festival in Buenos Aires during the summer of 2010. The Festival gave Blades and Franzetti the perfect opportunity to tackle the project.

Franzetti began by arranging five of Blades’s compositions for their performance: “Pablo Pueblo,” “Ligia Elena,” “Ella,” “Paula C” and “Pedro Navaja.” At the Festival, Blades and Franzetti were accompanied by the fantastic Leopoldo Federico Orchestra, which also recorded the pieces shortly thereafter. Once they returned to New York, Blades and Franzetti worked on arranging another six compositions, which were recorded with a tango quintet, with the strings and woodwinds recorded later in Prague.

Arranging Blades’s classic salsa material proved to be quite a difficult task. The two wanted to make sure they did justice to both the original salsa renditions and the tango tradition, so they had to make a number of artistic choices while creating their new arrangements. For example, salsa has a strict continuous beat while tango does not, tango being more attuned to classical music and utilizing a more rhapsodic feel. So Blades chose his more melodic songs for the project to help bridge the gap between genres more easily. Franzetti even utilized some Afro-Cuban rhythmic ideas on some of the compositions to really make the fusion unique.

The one thing that made the transition work especially well was that Blades’s lyrics could work in any genre but were especially well suited for tango, as his message and stories could be reflected on any street in the barrios of Spanish Harlem or those of Buenos Aires. The lyrics also helped to guide the arrangements, as Franzetti tried to echo sentiment and action within the moving parts of the music, amplifying Blades’s extraordinary storytelling abilities.

The recording begins with the lilting “Paula C,” a dramatic take on the romantic classic. “Ligia Elena” provides a perfect example of Blades’s story telling ability as a young society lady falls in love with a bohemian musician to the disappointment of her well to do family, all the while the music framing the lyrics perfectly. The powerfully moving “Ella” is an homage to a strong woman, though whom exactly is never disclosed. Heralding the plights of the poor, the meaning behind “Pablo Pueblo” gets magnified by the startling arrangement.

Perhaps Blades’s most well known composition, the story of murderous hustler “Pedro Navaja” who meets his demise, is represented on the streets of Buenos Aires while the rhythmic flair of the original remains with hints of charanga. The philosophic “Vida” asks the listener to accept others so that all may have a better life while “Juana Mayo” is a compassionate view of the struggles of a prostitute. “Sebastian” tells the story of the passions of an insane man who wishes to build a spaceship for his imaginary girlfriend.

The self-affirming “Parao” (literally meaning ‘stand tall’) is a quiet anthem for keeping one’s head up. Blades’s storytelling is probably the most poignant on his “Adán García,” a song about a poor man’s struggle to feed his family and his disastrous attempt to rob a bank with a toy gun, while the orchestra effectively parallels the deterioration of his mind. The recording concludes with “Tiempos,” a ballad with lyrics about life and forgiveness.

Ruben Blades has proven himself to be one of the greatest lyricists and songwriters of our time. The idea to frame his lyrics with the tremendous arrangements of Carlos Franzetti in the tango idiom only increases the drama of his poetry. Tangos will prove to cement the legacy of this master songwriter and the ability of his songs to transcend musical borders.