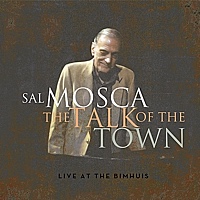 Out today is a superb two-CD set of previously unreleased live solo recordings by pianist Sal Mosca at the Bimhuis in Amsterdam on November 14, 1992. The recordings on Sal Mosca: The Talk of the Town (Sunnyside) come from the Mosca estate, and the sound is superb. The two CDs feature all jazz standards, like Ghost of a Chance, Donna Lee, Topsy, Cherokee, Love for Sale and much more. There also are five medleys of standards. Melodies aren't buried or turned inside out. Instead, Mosca embellishes them and creates an entirely new city of music on their foundation in the spirit of Art Tatum.

The concert lasted more than two hours with very little space between selections and featured a relaxed Mosca playing as pretty as can be. This is breathtaking art, and I can't recall the last time I enjoyed a set of piano legacy material as much as this one. Talk of the Town also is an eye-opener. This set finally establishes Mosca as a lyrical concert artist and gifted technician in his own right, flavored by many great pianists of the past. For too long, he has been viewed by some as a reclusive Lennie Tristano mini-me forever chasing after the approval of his teacher. After listening to this set, it's clear that Mosca was not only his own man but also could be just as exciting and dynamic as Tristano.

A little history. In the early 1940s, no jazz pianist was more influential on the up-and-coming generation of jazz musicians than Tatum. Duke Ellington, Teddy Wilson, Fats Waller and Earl Hines were all superstar stylists, but Tatum's dexterity and speed with both hands were terrifying and unimpeachable.

Many bebop musicians like Charlie Parker were heavily influenced by Tatum. Among them was Lennie Tristano, a blind pianist who had studied music through the graduate level in Chicago and moved to New York in 1946. Mosca was also taken with Tatum and began to seek him out in the mid-1940s.

As Elliott Simon wrote at AllAboutJazz.com in 2004, quoting Mosca:

“A friend of mine was in Chicago and he heard what he thought was Art Tatum playing in the cellar, but it was a blind white guy named Lennie Tristano. I later was on a club date in Brooklyn and heard that he was studying with Lennie Tristano. I said can you give me his phone number. I called and got my first lesson: Lennie asked 'Why Me?' and I said I want to play like Art Tatum and he said 'I don't play like that anymore, I have my own style' [From Tristano] I learned technique, harmony, melody so I was able to copy Art Tatum myself."

Like many of Tristano's students, however, Mosca was under his mentor's spell for some time. As Eunmi Shim writes in Lennie Tristano: His Life in Music: “Mosca studied with Tristano for eight years and saw Tristano's brother as a psychoanalyst. [Said Mosca,] 'I was in analysis with his brother for six years, but not because Lennie imposed that view on me. I needed analysis; and when I found out his brother was an analyst, since I dug Lennie I figured I'd try his brother, and I ended up digging his brother for his own scene. Because they both seemed very sincere about what they were trying to do, which was to help people."

Mosca, of course is best known for his stunning cool jazz recordings with the Lee Konitz Quintet in 1949 an with Konitz and Warne Marsh in 1955. Talk of the Town finally liberates Mosca from the myth of being a “Tristanolyte" and positions him as an exhilarating pianist with exceptional taste and grace. Some knew this all along. Now we all know it. Absolutely essential listening. Sal Mosca died in 2007 at age 80.

JazzWax doc: For the rest of Mosca's bio, here is Part 1 of the only known film of him...