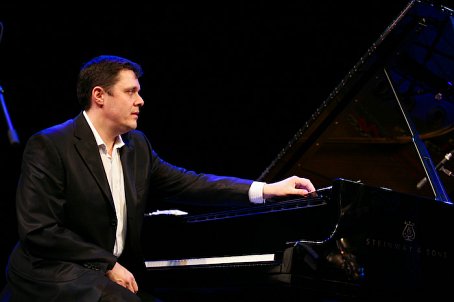 slideshow
Crisis or no crisis, the 2008-2009 jazz concert season in Russia was far from being eventless. New fruitful collaborations were unveiled, new record labels were launched, old festivals have convincingly confirmed that they were well alive and kicking, and many good Russian jazz albums have hit the stores. Those albums revealed a new trend, that of many exciting Russian-American joint ventures in jazz this year. Of those intercontinental collaborations, pianist Ivan Farmakovsky's debut as a leader, Next To The Shadow (Boheme Music, 2009), proved to be one of the most intriguing Russian jazz releases of the year.

The album marked something of homecoming for Framakovsky, who spent a few years outside jazz field playing electronic keyboards in one of Russia's most popular rock bands, Mumiy Troll. It was not until 2007 when Farmakovsky, finally disappointed by playing with rock musicians, decided to get back to his jazz roots entirely, and started to work on the material which later became Next To The Shadow.

AAJ Russia Correspondent Cyril Moshkow spoke with Farmakovsky about his career to date, and how he has continued to strive for greater authenticity while remaining true to his Russian roots.

Check out Ivan Farmakovsky: Raising the Bar at AAJ today!